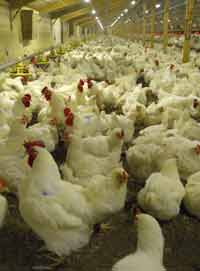 A parliamentary motion calling for the UK government to improve the welfare of chickens has reached the number one position with 239 MP signatures.

Over 35% of all UK MPs have supported Early Day Motion (EDM) 581, calling for clear and honest labelling on chicken meat and urging the UK government to improve the welfare of chickens reared for meat.

Mike Hancock MP, sponsor of EDM 581, said: “Animal welfare is an important issue among UK politicians and I hope more MPs will add their signature.

“The strong support for this parliamentary motion should send a clear message through the UK government and to the supermarkets that the welfare of chickens must be taken seriously.

“I thank the supporters of the Chicken Out! campaign for bringing this issue and parliamentary motion to the attention of their local MPs”.

Compassion in World Farming welcomed the success of the Early Day Motion and repeated its call on the UK government to introduce legislation that improves the lives of millions of chickens.