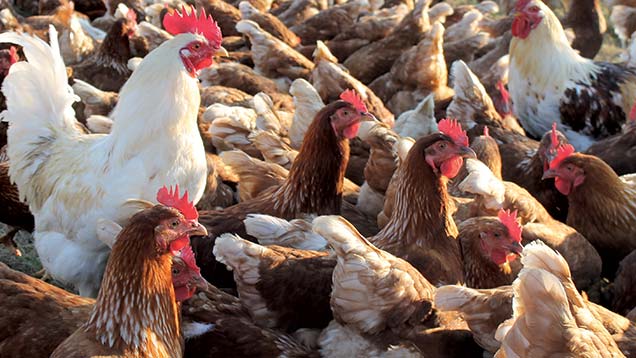 Organic egg and poultrymeat suppliers face a shortage of feed in the coming months, and a hike in price, as manufacturers struggle to get hold of sufficient raw material.

Problems first started to emerge around Easter, when shipments from Ukraine dried up. There had already been a problem with organic peas, following the detection of pesticide residues. But then organic sunflower meal, wheat and maize supplies ground to a halt.

While there has been no official clarification, traders understand that the certification body supervising organic production in Ukraine has been delisted.

“We get about 50% of our wheat from Ukraine, 70% of our maize and all of our sunflower,” Martin Humphrey, of Humphrey Feeds, told Poultry World. “This has presented us with a real challenge – especially in respect of the sunflower.”

Organic sunflower expeller is a crucial part of layer and broiler rations, he said, as it contains methionine – an essential amino acid. Without sunflower, compounders have to increase other proteins, such as soya, which upsets the balance of the diet and means birds have to expend energy excreting surplus protein.

With UK sunflower stocks running low, Mr Humphrey said his firm was already having to cut its inclusion rates. Boosting the methionine content by using other proteins was costing £10/t more.

“Importers are trying to honour their contracts, but there is just not enough between now and harvest.” Price rises were inevitable and, while most compounders will have bought forward, home mixers would go short.

Stephen Clarkson of UK certification body Organic Farmers and Growers said it was a “difficult situation”. Some mills had been able to source alternative material, “but it is very expensive and is going to put the price up,” he said.

EU rules only allow a maximum 5% non-organic material in rations, and no amino acids. “We are not able to issue any derogations – certainly not on the grounds of cost,” said Mr Clarkson.

There was still a lot of uncertainty about the situation in Ukraine and how long it might take to get certification reinstated, he added.

Harrow-based importer Feed Factors believes re-establishing certification in Ukraine will be time consuming. “They will have to go back along the whole supply chain, auditing farmers, hauliers, processors, storekeepers,” said a spokesman. “That will take many months – certainly into new crop. It seems that Ukraine will be shut off for some time.”

Any remaining organic material in Ukraine had probably been sold already as conventional to generate cashflow, and the same would apply to new crop, unless the certification problem is resolved.

Mr Humphrey said the problem had arisen at just the wrong time, as the organic sector was showing signs of recovery, following the economic recession. The organic egg market grew by 16% last year, according to the Soil Association.

“We don’t want to see the market now undermined by problems with supply, or worse still, questions about the integrity of the product. But we can only see the prospect of rising input costs, and that in time will mean prices will have to rise at retail, which could hit demand,” he said.