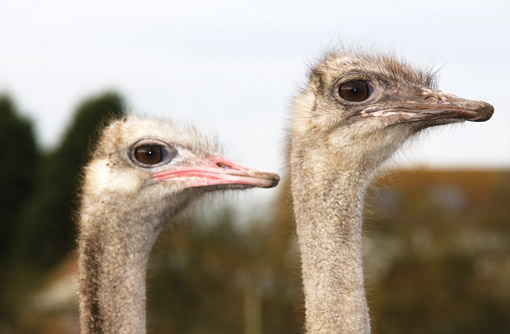 Ostrich farming may have been the archetypal “boom and bust” livestock business, but there are still those who firmly believe the true commercial potential was overlooked as people focused on making rapid profits from the sale of breeding stock.

The early 1990s saw a sudden rise in ostrich farming in the UK in line with its popularity in many other EU countries and across the world. But as in all developing livestock businesses, the initial trade was in the “seed stock” and the opportunity to make money from the sale of breeding birds attracted a barrage of entrepreneurs.

Ostriches were primarily imported from South Africa. But while there was a modicum of consideration given to actually farming the birds for their meat, the focus was largely on building-up numbers and selling eggs and chicks.

There was inadequate research into management, slaughter and effective marketing of the end product and, once the sector emerged from the establishment phase, those who had made hefty financial commitments suddenly found themselves with a commodity that was hard to shift.

The result was a gradual collapse and commercial ostrich farming was left in the hands of a few die-hards.

The British Domesticated Ostrich Association still operates to support the handful of ostrich farmers in the UK, but the expected expansion of ostrich meat production never happened.

At around £26/kg, ostrich steak is expensive. But the potential of this bird should not be overlooked. As well as its meat – around 45kg is produced from a 120kg male birds – there is also the opportunity to market feathers and ostrich “skin” for leather goods.

And now this ungainly bird is attracting interest from the medical profession. Some UK ostrich keepers have been approached by researchers into haemophilia who believe ostrich blood could be used to treat sufferers of this disease. It also appears that part of the eye of an ostrich has a use in treating cataracts in humans.

Fiona Benson lives in York, but was involved in ostrich farming in South Africa. She still believes there is “massive potential” to rear ostriches for meat in the UK, but says any revival will only happen when more advice is available on correct nutrition and management. Investment in slaughter facilities and marketing is also essential.

“There were a few of us across the world – from Chile to Poland and here in the UK – who were getting to grips with correct ostrich nutrition. Nutrient density is the key by providing a ration that gives the birds what they need because they eat very little compared with their size. Vitamin and mineral supplementation is very important.

“An adult bird will eat around 2kg of a 90% dry matter feed comprising lucerne, maize, soya and possibly high quality corn gluten meal,” says Ms Benson who had been actively involved in formulating and producing ostrich diets with USA nutritionists.

“The research and development has been done. If ostrich farming took off again in the UK we have the diets the birds need and can fire-up production. Unfortunately in the early days many birds were incorrectly fed, there were health issues and performance was poor.”

While Ms Benson urges caution for those keen to embark upon ostrich farming, she remains convinced that, on a scale that would encourage investment in infrastructure, ostrich production is viable.

“The most productive birds will produce 90-100 eggs a year and a hatchability of 85% should be achievable. But because there has been a lack of understanding about how to manage ostriches commercially, some birds only produced a few chicks. The potential is there, but rearing ostriches is precision farming. In the UK it has never really been given the chance to show what it’s capable of.” 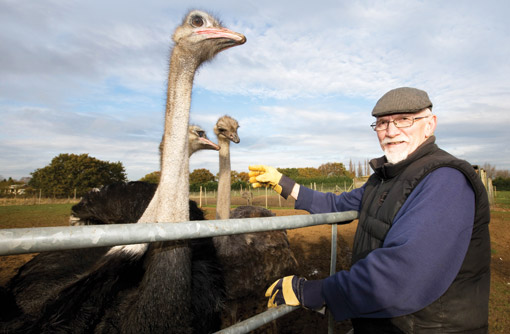 Harold Paine set up Ostrichfayre nine years ago on his holding in Nottinghamshire and currently has around 35 birds. While his ostrich steak retails at around £26/kg – most sold through farmers markets and on the internet – he believes demand for meat, as well as feathers and skins could be expanded.

“In times of recession it’s a luxury product, but there is still a market for ostrich meat – and it’s one that could be developed if the infrastructure to market and promote it was put in place,” he says.

Mr Paine has developed his own management system – largely by trial and error. Birds are finished at 12-18 months old with males reaching 120kg and females 90-95kg, producing 45kg and 35kg of saleable meat respectively.

Ostriches may not be the most intelligent birds, but they are powerful and unpredictable. Strong and secure fencing is essential.

“Anyone considering ostriches must ensure they have well-fenced paddocks. But it’s also important to take account of anything that may spook the birds. Low-flying aircraft or any other airborne craft can cause problems.”

Young and finishing birds at Ostrichfayre are run at around 10-15 birds in half-acre paddocks, but the land is light and well-drained. Field shelters are the only protection provided.

The grass paddocks are fenced with high tensile steel stock wire, (7ft high), which has more “spring” so birds don’t damage themselves if they hit the perimeter at speed. Two basic diets are fed – a breeder ration and a grower ration. “We have these specifically made for us by Dodson and Horrell, but we add a high-protein beef nut to the breeder diet to help lower the cost. We also add alfalfa nuts.

“We’ve spent several years evaluating different approaches to feeding ostriches and feel we now have a good diet that suits the birds. But they can’t tolerate any medication in the diet, unlike turkeys or chickens. All the ratite species – that’s ostriches, rheas and emus – have the same intolerance.

“There are other ostrich diets on the market, but we’re trying to feed the birds as well as we can while still keeping an eye on costs,” says Mr Paine, who feeds his birds twice a day.

Egg yield from the birds at Ostrichfayre – which are run as breeding trios – is only around 30 a season. Birds come into lay at around two years old and begin laying in April. They produce an egg every other day for around two weeks and then resume laying after a rest of around a week. Eggs are usually incubated, though Ostrichfayre has allowed a clutch to be naturally incubated – a job undertaken by the male bird. Incubation time is an average of 42 days.

“Hatchability can be variable. Out of 100 eggs incubated we can be lucky to get 40 chicks, but it was much higher when we allowed the birds to hatch their own. They achieved 90% hatchability.”

Nevertheless retrieving the newly hatched chicks from the paddock and coping with the aggression of the adult birds highlights the care that needs to be taken when dealing with mature ostriches.

“Birds are usually reasonably quiet up to about a year old, but after that they start to become aggressive towards humans. We like to handle chicks as much as we can in the early stages because even young birds will attack you if they aren’t used to having any contact. All ostriches have to be handled with respect.”

Mr Paine says there is some South African ostrich meat imported into the UK, but it’s produced from birds that are slaughtered at younger ages – usually around eight months.

“The steaks are much smaller and don’t have the flavour or quality of meat produced from birds that are allowed to mature.”

There is currently only one slaughterhouse in the UK able to handle ostriches – an issue that typifies the problems ostrich farming in the UK has faced in terms of infrastructure.

Ostrichfayre produces burgers and sausages from ostrich meat – as well as ostrich steaks. But Mr Paine says the meat is very versatile and ostrich pastrami is popular among his customers.

“Some supermarkets have stocked ostrich meat and all the reports suggest it has sold well. The problem is they don’t provide any information about how to cook it and consumers don’t always get the best results because they don’t know how to deal with it. If it’s over-cooked it becomes very tough.”