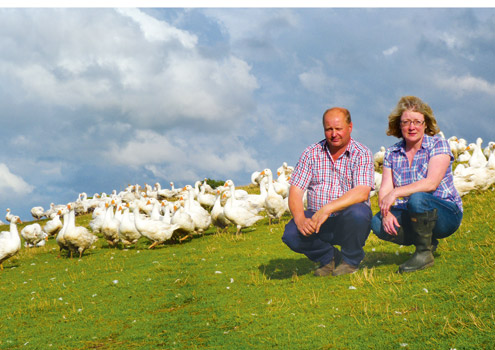 Enter “goose” and “Shropshire” into Google and you will be directed to Brisbourne Geese. This is not techno-wizardry – just the establishment of a brand over more than 30 years. Jake Davies reports

William Brisbourne began rearing geese as a hobby after leaving school in 1979.

It ticked along nicely until two years ago when he dropped milk production from his diverse range of farming activities and, together with his wife Jennie, concentrated on building sales of geese for the Christmas market.

Converting the farm from mainly dairy to larger-scale goose production meant that sheds that once housed dairy cows became night-time shelters for the free-range birds.

The milking parlour, built by Mr Brisbourne’s father in the 1960s, has become a slaughter-to-sales production line. Live geese go in one side of the long parlour and prepared birds are sold on collection day from the other.

One immediate challenge was to expand sales beyond the already established farmgate and butcher trade, says Mrs Brisbourne.

To address this, a priority over the last two years has been creating more of a “branded” product. This has meant tidying-up the logo, rebuilding the website, and actively inviting newspapers, magazines and radio stations to visit the farm and learn more about Brisbourne Geese.

“We’ve always used a picture of a goose on our products, but over the last 12 months we’ve begun using the same picture. We have also begun producing a double-sided postcard that we place everywhere we can.”

Redeveloping the website was an incentive to get all products aligned with the same brand, says Mrs Brisbourne. “The content has remained very similar since it went up, but it has been revamped for this season with a more contemporary look.”

The change has paid dividends. “There’s a huge difference in orders coming from it compared with two years ago. We can’t take orders directly through it, but customers print an order form off and return it to reserve a bird. It works well for the size business we are.

Another focus has been getting coverage in local and national media, something the Brisbournes have had some real success with. “We’ve had editorial in Country and Border Life, and a lot of local newspapers and magazines. BBC Radio Shropshire usually visits near Christmas, and last year Radio 4’s Farming Today produced a feature about collection day.

“We often approach the media, trying to present ourselves in a different way each year. We also do a small amount of advertising with our local newspapers and the county glossy mag,” says Mrs Brisbourne. “But most new customers come from recommendations that friends make.”

This more focused approach to marketing has helped build customer loyalty and made it easier for the business to push through a 6% price rise last year and another 5% this year – crucial given the current rise in feed costs.

The Brisbournes have also just been recognised by the British Poultry Council, winning its marketing award for 2012, for their promotion of not only their own geese, but the entire industry. The judges said they were particularly impressed by their open farm approach and their “efficient, funky website”.

The key to adding value and building consumer confidence is to stop seeing eggs and poultrymeat as a commodity, says Adam Leyland*, editor of retail trade magazine The Grocer.

Mr Leyland believes that players in the egg and poultry industry can be too focused on what happens on the farm, when they should be spending more time in the supermarkets, looking at their products as the consumer sees it.

Noble Foods is a good example of a company which has broken away from commodities. “It has launched two of the best brands that I have seen in any category, let alone poultry – Happy Eggs, and Eggs for Soldiers.”

The company’s acquisition of the luxury pudding brand Gü was another example. “We all know they are nice chocolate puds that have quite a lot of egg in them, but it wasn’t immediately obvious that this was going to create incredible cost efficiencies. The fact is, this diversification has created a business with really fast growth.”

Other commodity-like products that have successfully become “brands” include Tyrrell’s crisps which have turned potatoes into a high-value brand, and Innocent Smoothies. “You can guarantee what they taste like and buyers respond to this confidence,” says Mr Leyland.

Watch the video on geese production on William Brisbourne’s farm