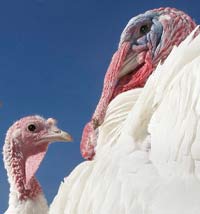 The economic downturn bought a slow start to the traditional farm fresh Christmas turkey market. But the final run-up saw some producers reporting 2008 as one of their best years.

Many of the producers experienced what Traditional Farmfresh Turkey Association (TFTA) chairman Mick Binder described as a “hairy start” to the season, with butchers reluctant to place orders until they had heard back from customers.

Speaking at the Anglian Turkey Association’s post-mortem meeting last month, Essex producer Jonathan Smith, who grew 6000 turkeys, said: “The whole bird is still the best value for money. You may have sold the joint, but you still have to find a market for crown, drums and thighs.”

TFTA’s vice-chairman Robert Garner said he was 20% down on his butchers’ orders on 15 December and they didn’t pick up until his retailers and their customers realised that time was running out.

He marketed his 3000 free-range bronze birds under the Golden Promise label packing them in this year’s boxes.

“We had stepped up our promotional campaign publicity drive and increased the number of roadside posters and it worked. Farmgate sales were up 18% on 2007 and we had our best Christmas for years. Now we are looking forward to Christmas 2009,” he added.

While Eddie Hegarty from Norfolk Geese, felt his geese could have benefited from more promotion, particularly from butchers. “They find it easier to push turkey and the goose loses out,” he suggested.

Goose producer George Munns said: “I thought I was going to be left with birds on my hand at one stage, which would have been a pity because it was the best possible year in which to grow geese. There was plenty of rain and lush grass and no prolonged dry periods to scorch the grass.”

But both Mr Hegarty and Mr Munns reported a rush in the market in the final days of trade.

Auctioneers Stanfords experienced an improved turkey trade in 2008 and the total of 191 geese over the two days was said to be the largest display of geese in recent years with large birds around £2/lb (0.91kg).