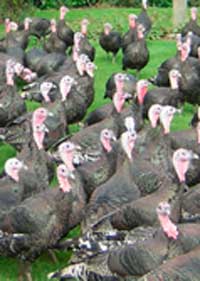 For the first time since the 1950s the majority of turkeys sold for this year’s Christmas market will be bronze breeds, according to Paul Kelly from Kelly’s Turkeys and FarmGate Hatcheries.

“We’ve seen a continuing trend to bronze and with another 5% growth this year we reckon bronze will represent more than 65% of the traditional market,” said Mr Kelly.

“That hasn’t happened since the 1950s before the white feathered turkeys began to dominate the market and all but took over completely by the 1980s.”

But its a different story in Scotland with white turkeys still dominating. Mr Kelly supposes farmers are more cost consciousness north of the border but this hasn’t deterred him from expanding operations there due to strong customer demand.

Currently poult sales are down 2% on last year but Mr Kelly suspects farmers are waiting longer to order.

“Many farmers are contacting their customers first and finding they’re likely to order a similar number of birds this year,” he said.

“Even in difficult times many families don’t want to economise on the favourite meal of the year – and, it seems, retailers are expecting fewer families to eat out at Christmas. So the farmer’s turkey could benefit at the expense of the catering turkey.”

For producers wishing to save money amid high feed prices, FarmGate Hatcheries advises buying as-hatched poults for at least one-third of the order as small strain stag turkeys will grow as well as a large strain hen.