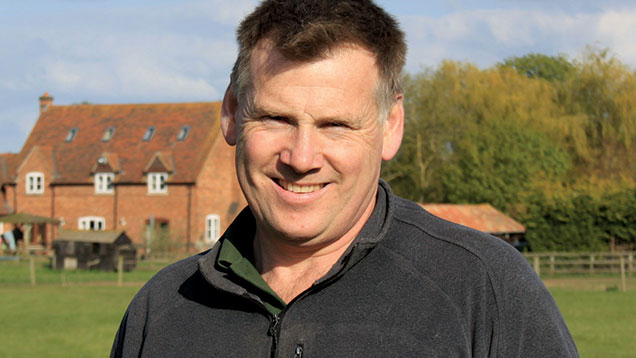 It’s easier to list the livestock that John Franklin doesn’t keep on his 200-acre farm in the village of Thorncote, Bedfordshire, rather than the ones he does.

What began as an egg round has turned into a bewildering array of farm animals, all living in free-range rotation.

Also notable on the day of the walk was the huge number of people that the chairman had invited along. Not just goose producers, but students from local agricultural colleges were welcomed to see a business with a truly diverse livestock base.

Franklins of Thorncote began as an outfit marketing direct to consumers in 1987 with a free-range egg round, run as a separate entity to the family farm. It wasn’t long before turkeys and geese began to be grown for Christmas, and later farmers’ markets began to gain in popularity across the county.

Mr Franklin, with the help of sister Blanche, took full advantage of these new marketing platforms.

Free-range ducks and chickens were added to the ever-growing roster of animals and, in 2003, a permanent outlet for produce was opened in the form of a farm shop in a converted livestock shed.

It retails red meat, pork and poultry from the farm, game from local shoots and a variety of local produce. In keeping with the ethos of the farm, everything is fully traceable.

The business also keeps a regular pitch at 14 different farmers’ markets, and offers hog roasts – adding value to its own pigs – and courses in butchery. It’s a diverse offering that keeps the business busy year-round.

All this activity leads to the employment of a relatively high number of people. There are 10 full-time staff members year-round, rising to 20 in the run up to Christmas.

“We’ve always wanted to market directly to the customer,” says Mr Franklin. “That way you are in control of the price.

“We found, when starting out, that butchers were already supplied by local farms, so we started leafleting around the local villages, selling door to door, and finding customers that way.”

In a world where farms are increasingly mono-cultured, concentrating on a single produce at maximum efficiency and volume, it’s refreshing to see a farm can still operate as a relatively small mixed enterprise. Marketing the meat directly is clearly the key.

The number of different species of poultry penned separately on grass behind the farm is impressive, and numbers are tuned to the needs of the business and kept under constant review.

“We brought goose numbers back to around 450 in order to concentrate on selling through the farm shop and farmers’ markets,” explains Mr Franklin. They are kept on grass pasture behind the farm shop, affording customers a clear view of where the meat behind the counters comes from.

The geese and ducks are bought in as day-old, and kept separate to avoid too much ruckus. While geese, like turkeys are available from Michaelmas to Christmas, the ducks and broilers are sold year-round, with a few cockerels and ducks grown heavy for the seasonal market.

Avian influenza – a timely topic – forced a slight rethink of the whereabouts of all the birds on farm. Mr Franklin recognised around the time of the last outbreak in Norfolk that the farm could not comfortably keep all birds indoors if necessary.

The turkeys, as the most susceptible to disease, were separated from other birds and a strict policy of feeding and tending to them in isolation was put in place.

Poultry is processed on-site, slaughtered and prepared just yards from the store shelves it will eventually end up on.

One inroad into adding value has been the three-bird roast, which typically contains a game bird, chicken and goose. It is sold deboned and oven-ready.

Restaurants are also keen to be associated with the Franklin brand. In return, they are asked to list the brand on the menu where possible, to keep up constant promotion.

But restaurant demand can be sporadic, so Mr Franklin is always keen to continue marketing through his own channels.

This is simply keeping an eye out for trends and giving customers what they want, he says. “One lady asked for a five-bird roast this year. You try and accommodate where possible. We’ve got the skills, equipment and knowhow.”

Another consideration is keeping the offering fresh. With some customers having shopped with Franklin’s for many years, Mr Franklin is keen to keep experimenting with the range.