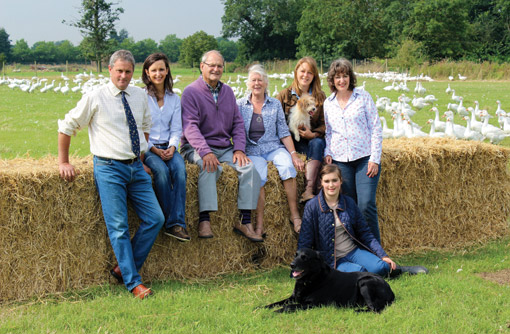 Bill Homewood is the first to admit that rearing free-range geese and turkeys for the Christmas market is not good for cashflow.

However, poultry enterprises have helped to support his family at Peach Croft Farm for more than 75 years, with bird sales currently making up around 60% of turnover and 60-70% of farm profitability.

The Homewoods have been tenants at Peach Croft, near Abingdon in Oxfordshire, for three generations. The 700-acre farm grows 550 acres of arable crops, some of which is used for poultry feed.

By the time he reached the age of 11, Mr Homewood had already decided that he wanted to join the family business. “I never really considered anything else,” he says. “I came back home after finishing a Higher National Diploma in agriculture at the Royal Agricultural College and I have been here ever since.

“We reviewed our farming policy in the late 1990s and decided to increase the focus on the poultry business, because we could see it had good potential for growth.

“Turkey numbers have risen steadily from 3,500 to 8,500 birds and goose numbers have reached 3,000 to meet customer demand. People are looking for something a little different for their Christmas lunch and goose has become a popular option. It was not too difficult to develop sales, because many of our wholesale turkey customers were willing to take them.”

The poultry take up around 80 acres of grassland, which is divided into a dozen paddocks. Several types of housing are used, including three polytunnels, a traditional pole barn and a portal-frame building, which is divided in two. Straw from the arable enterprise is used for bedding.

Slow-growing breeds are favoured, with day-old chicks from eight strains and two separate hatch dates purchased, to achieve an even spread of weights. Fresh turkeys range from 5-11kg, with oven-ready geese from 4-8kg. Turkey crowns at 3-6kg and boneless rolled joints at 2.5-6kg are also available. Mr Homewood describes the production process as a “juggling act”.

“It takes years of experience to bring birds up to their finished weights in time for Christmas,” he explains. “But genetic progress with breeding means that we can quite accurately predict how birds will perform.”

Bringing the birds to full maturity takes around six to eight months. Fed on home-grown cereals, including naked oats, the aim is to achieve a degree of fat cover, to enhance meat flavour and texture. Added to make up 15% of the ration, the oats give the birds’ skin a “special bloom”.

All the birds are dry-plucked by hand in the traditional way, with the help of disc pluckers, while the geese are wax-finished. Both the turkeys and geese are hung in a maturation refrigerator for 10-14 days, as another way of improving eating quality.

Customers for the oven-ready birds are supplied with a carry home box, featuring the Peach Croft Farm branding and also containing cooking instructions, fresh herbs and a recipe booklet. Refrigerated vans are hired for Christmas deliveries, while online orders are sent by courier.

As well as being sold through the farm shop, Christmas birds from Peach Croft Poultry go to independent butcher’s shops as far away as Cheshire and Eastbourne. They are also available through selected retailers, including Harrods and Fortnum & Mason.

The Homewoods were asked to produce a Red Bourbon turkey for Fortnum & Mason, with the resulting bird securing them first place in the store’s Food Supplier of the Year award in 2011. Peach Croft also won The Times newspaper’s Chef’s Taste Test competition last year.

A lot of effort has been put into the company website, which features a video showing how the birds are reared. This is generating a growing number of online sales. Mr Homewood says he is constantly on the lookout for new customers. 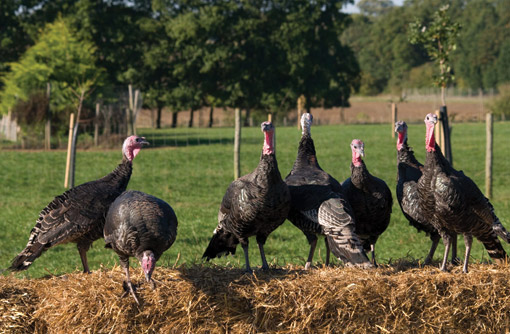 “Oxford University is close by and it attracts a lot of Americans to the area. They celebrate Thanksgiving in November and we supply around 300 turkeys for that market annually. A couple of hundred geese are also ordered by people who celebrate Michaelmas in September.

“These may seem small numbers, but it very useful for us to slaughter a small percentage of birds at an early stage. It gives us the chance to see how they are performing, as the main Christmas season approaches.”

Mr Homewood and his family work hard to maintain a high standard of customer service, in order to encourage repeat business. He spends at least 20% of his time on marketing over the year, although he is out on the farm at 6.30am, to help start the morning routine.

Spring is the main period for actively seeking new outlets and he will travel around for several weeks, visiting independent butchers and retailers. His wife, Kim, has a recruitment background and is highly skilled at telephone cold calling.

“Butcher’s shops have suffered because of supermarket competition, but the surviving businesses seem to be doing well. They are always looking for good quality meat and the fact that we can offer full traceability is a point of difference. Some of our customer relationships span three decades.”

Peach Croft Farm is a member of the Traditional Farmfresh Turkey Association, with all the birds produced according to the association’s quality and welfare codes.

Mr Homewood’s mother, Nancy, started making goose feather and down pillows more than two decades ago and the business now sells around 400 a year. Surplus goose feathers are marketed in bulk loads, but there is a fee for the disposal of turkey feathers. A change in the law means they can no longer be ploughed into the land for manure.

“The pillows seemed an obvious way to make use of a by-product,” says Mr Homewood. “We bag and sterilise the feathers on the farm and send them on to the Norfolk Feather Company for processing. The pillows are available in retail outlets, and we also sell them online and in our farm shop.”