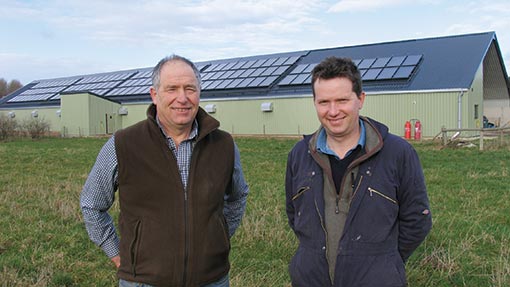 With energy prices continuing to rise, concern was growing for Shropshire game farmer Sam Barker as to the effect that heavy energy use and rising costs were having on the operating costs of his successful pheasant rearing business.

JE Barker and Sons rear three crops of pheasant poults between two rearing sheds throughout the short season, which runs from late spring through to the summer. The poults require a high initial heat load with the air and floor temperature kept at 35C, before being reduced 0.5C per day down to ambient temperature. This heating was one of the most significant weights on the company’s balance sheet.

Having already installed a successful solar PV array at a different site, and with the capacity to combine renewable technologies, TGE Group was asked to design a sustainable and efficient solution which would be cost-effective, inherently reliable and simple to control.

After considering a range of renewable options – including solar PV, heat pumps and biomass – it was agreed that a large solar thermal system would be best suited to the seasonal heat requirements of game rearing, working alongside a smaller solar PV system to provide electricity for use on site.

Solar thermal’s period of peak efficiency closely matches the pheasant rearing season, with maximum heat output from late spring to early autumn. In the winter months, when solar thermal is at its lowest, the two empty rearing sheds would be used to dry and house harvested grain. This brought additional benefits to the farm and further savings to energy bills.

The timing for the project also worked well. JE Barker and Sons were erecting new sheds and therefore the shed design also took into consideration renewable options during the design and build phase. By using performance modelling software matching building fabric with climate data, TGE was able to analyse the effect of weather conditions on energy consumption throughout the year. From this information the team was able to design a system that would ensure optimum efficiency and output to cover the base energy load for the building.

The final design comprised a 126 panel (192kW) solar thermal hot water system – one of the largest commercial systems in the UK – to provide space heating across the two sheds, with a smaller 7.6kWp solar PV system taking up the remaining roof space to provide electricity as well as an additional income through the Feed-in-Tariff (FiT).

The water heated from the solar thermal panels is stored in a 10,000 litre tank, which in turn is controlled by a thermostat. The heat from the thermal store is used first and, if more heat is required, existing gas boilers automatically kick-in. Normally, the gas boilers will only be required in the evening when solar radiation is at its lowest.

The heat is then distributed throughout the sheds via an under-floor heating system which produces even temperature, reducing crowding under a single heat source and subsequent competition from other birds that lead to stressors that can affect the bird’s welfare and ability to fight infection.

In order to ensure the system is operating at maximum output, a monitoring system was installed which has shown that, to date, the output is matching predicted levels, with 70% of the heat requirement being met by the solar thermal system. The performance monitoring will also highlight any glitches, enabling any problems that may affect performance to be quickly rectified.

TGE Group also carries out an annual inspection, plus periodic wash down, as required.

Eligible for the Renewable Heat Incentive (RHI), 10p will be paid for every unit of solar thermal heat generated, compared to a cost of around 4p for every unit of gas used, and up to 8p if heating oil is used.

Initial estimates show that JE Barker and Sons look set to earn over £450,000 in payments and savings over the 20 years of the RHI, giving the company a six-year payback on capital costs and reducing carbon emissions by 32t a year.

The solar PV will also generate a further 6,000kWh of electricity, which will earn over £800 a year in FiT payments, while saving 2.6t of carbon each year.

The feedback from the Barkers has been positive and, indeed, they have been “astounded” by how much heat is being produced.

The project has been designed around their individual circumstances to produce a bespoke system which harnesses nature’s free energy to satisfy their heat requirement.

Historically poultry units have been better suited to heat pumps, biomass and solar PV. But when taking a more holistic approach to the site’s energy needs and available resources, sometimes more unusual yet highly effective systems are created.

Solar collectors absorb the sun’s warmth and transfer it to a heat-transfer fluid. This is typically a glycol and water mixture in regions where seasonal freezing in a concern.

The heat-transfer fluid is then pumped into a heat exchanger located inside the water storage tank where it heats the water. A controller keeps the fluid circulating whenever there is heat available in the solar collectors. In the winter, a boiler serves as an alternate heat source.