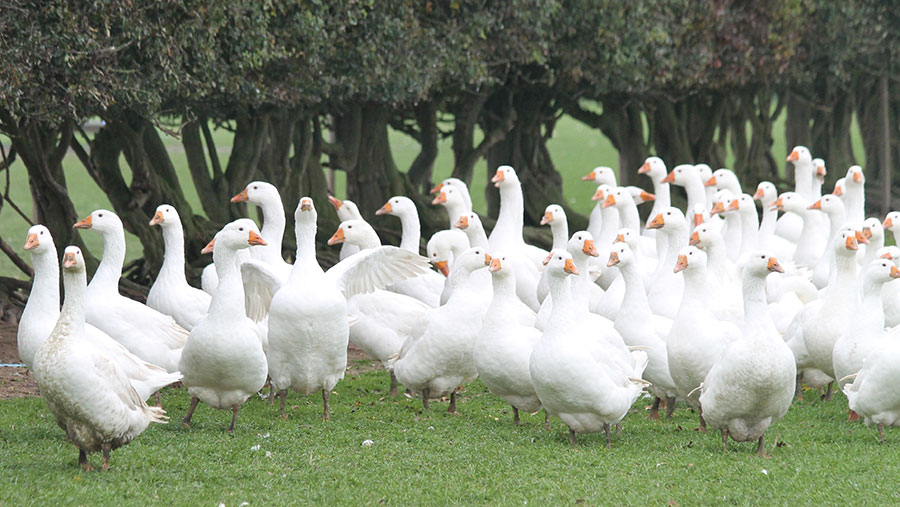 Goose producers are looking to achieve a small increase in prices for their birds this Christmas, despite a drop in feed costs over the past 12 months.

A discussion on market prospects at the recent British Goose Producers annual farm walk, held at Great Grove Poultry in Norfolk, revealed that price rises of up to 3% are in the pipeline.

Howard Blackwell of Blackwell’s Farm Produce in Essex said this was what he was putting his prices up by, having held them steady for the past two seasons.

“Feed is cheap this year, but who knows what it will be next year? It could be £200/t for wheat and then you’ll have to go up a lot.

“Employment is good, mortgages are low, petrol is low, people in jobs have got plenty of money – I don’t think they’re going to notice another pound or two for a goose this year.”

Michael Goodman of Goodman’s Geese in Worcestershire said they were putting up prices by about 10p/kg to reflect the rising cost of labour.

“Employment is good, mortgages are low, petrol is low, people in jobs have got plenty of money – I don’t think they’re going to notice another pound or two for a goose this year”
Howard Blackwell, Blackwell’s Farm Produce

“We all know that labour is becoming more expensive and harder to find,” he said.

A similar small rise was planned by Claire Symington of Seldom Seen Farm geese in Leicestershire, who said there had been a notable increase in early orders.

But BGP chairman John Franklin of Franklins of Thorncote, Bedfordshire said he was keeping prices steady, off the back of cheaper feed.

“It’s a good idea to hold a butchers’ open day,” he said.

“If you can get them down to the farm, then when they are talking to their customers over the counter, they can really help with the marketing.”

There was a good turnout of BGP members at the event.

Host for the day Steve Childerhouse explained how the family business had grown from just four geese for Christmas 20 years ago to a thriving enterprise, with 9,000 turkeys and 800 geese across 50 acres today.

The emphasis at Whews Farm near Attleborough was on keeping production as natural as possible, while minimising the labour input.

Look out for a full farm profile in December’s Poultry World.