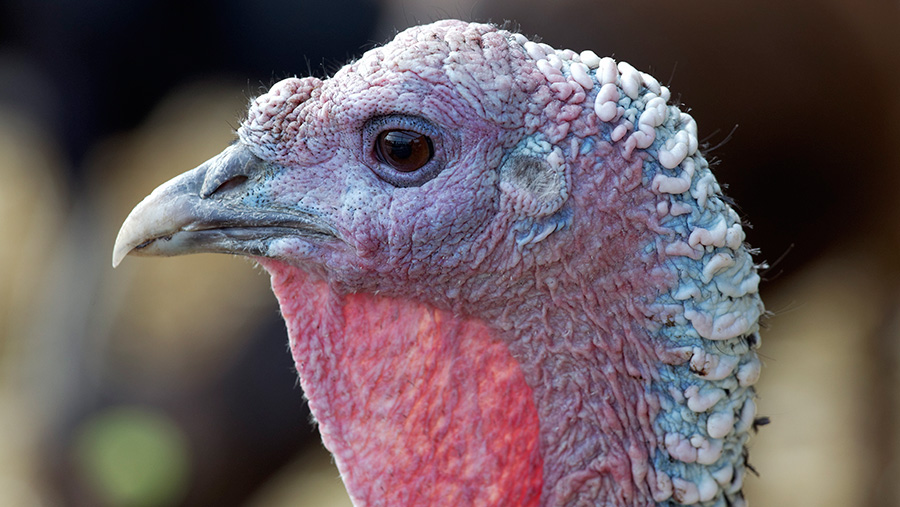 Turkey producer, Craig Michie, has focused on growing a strong reputation side-by-side with bird numbers, and is reaping foodie awards left right and centre as a result.

We find out how the town planner-turned poultry producer built up his business to become an award-winning enterprise.

It starts with the selection of specialist breeds of turkey, coupled with a traditional feeding regime to grow the birds more slowly and careful post-slaughter treatment, including dry plucking, are the factors which Mr Michie says ensure the unique flavour and succulence of Barra Bronze.

And all this is communicated to potential customers with a professional marketing campaign which makes full use of social media and a dedicated website.

Mr Michie gave up a career in town planning to return to the family farm of Lochend of Barra, Oldmeldrum, near Aberdeen, to develop his turkey business. 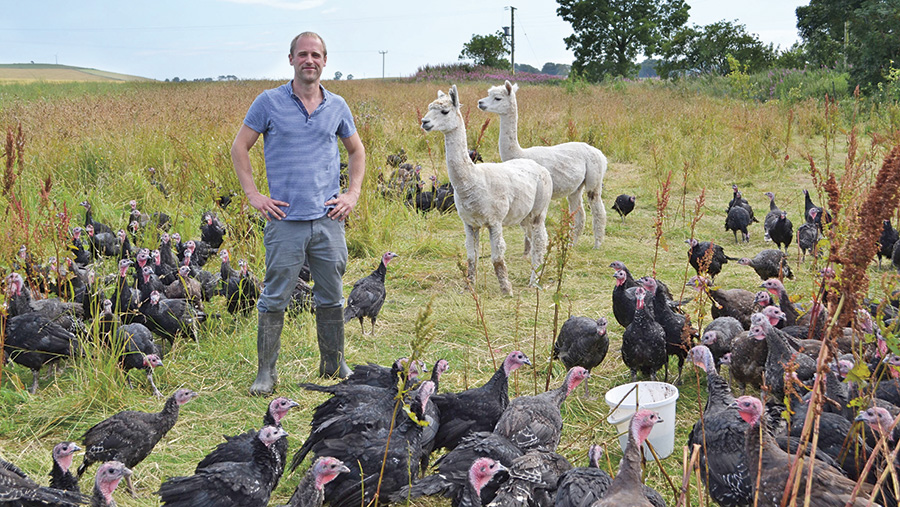 “My father runs a largely arable operation on our [170ha] but farming is facing difficult times. We had to diversify to generate another income stream.”

Dealing with customers face-to-face at local farmers’ markets proved a worthwhile experience in gauging customer reaction and while most sales are still local, the reach of social media means that the customer profile is already UK-wide, with deliveries by courier to Glasgow, Edinburgh and London.

A whole auction ring to promote Barra Bronze was also taken at the local auction mart at Thainstone Centre for the annual Taste of Grampian food festival and proved a great success.

A friend in a turkey costume proved a hit attracting visitors to the stand and kids loved to see the turkey poults scampering about the ring.

The stand also attracted a BBC camera crew, which resulted in Mr Michie being interviewed for the second series of the documentary, The Mart, due to be screened on BBC Scotland in the early part of next year.

Mr Michie gave up his job in 2009 and spent some time travelling in South America, where he met his Colombian wife, Maria, who is very supportive of his new career path.

He is the first to admit it is his wife’s salary as a doctor which has allowed him to indulge his passion for the turkey project, with all proceeds from the sale of turkeys being ploughed back in to the business.

“We’re producing only 1,200 turkeys a year at present for the Christmas market but have plans to expand the business into a profitable, self-supporting enterprise,” he says.

“Customers like our product and I’m confident the market is there for the high-quality turkey we’re producing.”

The first step has been taken with investment in a 46m polythene-clad tunnel to replace the redundant farm buildings, which have been used for rearing the first batches of turkeys.

The tunnel is straw-bedded and the open sides provide plenty of natural ventilation.

The new tunnel has eased the workload considerably, with automatic feeding replacing the manual handling of feed in bags.

Harbro’s mobile mixer calls every three or four weeks to mix the feed, which is stored in a bin and conveyed by augur to the feed troughs.

The mix comprises wheat, barley and oats grown on the farm along with soya to boost protein.

This is fed as a crumb in the first few weeks before moving on to pellets.

The proportion of oats in the mix is increased in the final stages of finishing.

“Oats are a great feed and full of antioxidants,” he explains.

“The inclusion of oats allows the turkeys to be grown more slowly, which adds to the flavour and produces darker leg meat.

“Our turkeys take 26 weeks to finish compared with the more normal 22 weeks on most units.”

Feeding oats is something of a family tradition as Mr Michie’s great grandfather – who moved from a hill farm in west Aberdeenshire to the more fertile land of Barra in 1928 – fed home-grown oats to turkeys in the 1950s and commented then that oats gave turkeys a beautiful, creamy-coloured finish.

Mr Michie says that the difference in flavour really comes out in the stock from the cooked turkey.

“The gravy is phenomenal with a rich, gamey flavour with sweet undertones,” he says.

“It is so much better than the mass-produced poultry you get all the year round.”

Another factor that helps to improve flavour and adds to the naturalness of the finished product is the extensive area of game cover which the birds are allowed to graze.

“The mixture grows to an enormous height in early summer but the birds strip it bare in no time at all,” says Mr Michie.

“The poults soon create paths through the undergrowth and feel safe enough to wander further and further away from the tunnel.”

The area is ring fenced to keep out predators and, as an extra precaution, two alpacas stand guard and are very protective of the turkeys, giving short shrift to any marauding fox or badger which gets close.

The birds pick at the grass, which stops them fighting or pecking each other, and they are able to pick up insects which provide another source of protein.

“We are producing a truly free-range product,” Mr Michie enthuses.

“The welfare of our turkeys is my greatest consideration and when we say our turkeys are free-range, we really mean it. Barra Bronze turkeys grow up feeling the wind in their feathers and the sun on their backs.”

The turkey poults arrive on the farm at day-old at the beginning of June and remain indoors for the first few weeks under heat.

They are free to roam outdoors from early July onwards.

The Wirall, Hockenhull and Devonshire Bronze breeds have been specially selected because they grow more slowly and instinctively enjoy foraging around which, together with the inclusion of oats in the diet, ensures greater depth of flavour in the meat.

Only female turkeys are reared because they grow more slowly and are more flavoursome than the males.

“The combination of breed and natural feed ensures Barra Bronze turkeys are unique and distinctive with a special flavour that is truly sublime,” says Mr Michie.

The turkeys are not only reared on the farm, but processed on the farm too to keep pre-slaughter stress to a minimum, as this can have a detrimental effect on eating quality.

All are dry plucked and finished by hand rather than the modern method of boiling in wax, which tends to remove the top layer of skin.

The skin acts to hold in the flavour which gives the turkey a crispy finish when cooked.

Dry plucking also enables the turkeys to be hung in a cold store for two weeks, allowing the meat to mature and further adds to the depth of flavour.

The Barra Bronze is wrapped in grease-proof paper, trussed and individually boxed in a robust attractively designed box with full cooking instructions and – a nice touch – a pop up thermometer and sprig of herbs.

If enthusiasm and commitment are the essential ingredients of a successful business, Mr Michie has it in spades and there is little doubt that Barra Bronze is set to make an impact on the turkey market.

“Barra Bronze has been created with a desire to produce something extra special,” says Mr Michie. “It was born as a result of my passion for farming and desire to continue and progress traditional methods to produce the very finest turkeys.

“I’m putting all my energy and effort into rearing and producing turkeys to give our customers an eating experience which I hope is memorable.”

Craig Michie recently won plaudits for his poultry, walking away from the annual Grampian Food Innovation Awards with two of the top accolades.

The Barra Bronze brand won the “judges’ choice” award, as well as being placed runner-up for the best new retail product from businesses with up to 25 employees, in the awards which has vindicated Mr Michie’s dream of producing something “extra special” to provide consumers with a memorable eating experience.

The judges were particularly impressed with Mr Michie’s passion for his product and loved the provenance behind the story of rearing through to retail.

“Craig has created something quite special and unique,” the judges’ citation stated. “He is a driven, ambitious individual who has chosen to return to the family farm, remaining true to traditional methods of production with a clear focus on growing the business.”

“Our success in the food innovation awards has given us a huge boost and the endorsement of celebrity chefs such as Nick Nairn and Claire Macdonald and a gold star rating in the Good Food Guide,” adds Mr Michie.