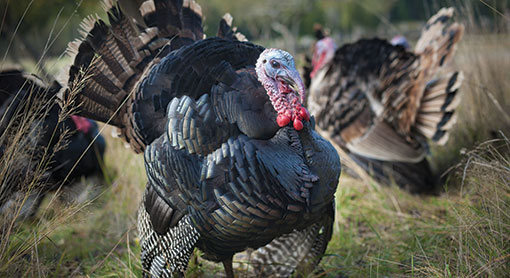 A new tool that can analyse the environmental impact of turkey production “from poult to plate” has found that imported soya can have fewer environmental implications than home-grown proteins.

Despite this, feed is the largest contributor to global warming potential in the turkey lifecycle. It also suggests birds reared in indoor systems have a smaller carbon footprint than those reared free range.

The tool was developed by a cross-section of industry companies, academics and the British Poultry Council, and it is hoped it will highlight areas in which turkey farming could improve its sustainability.

It can take into account the effect of every input required to produce an oven-ready bird, including each component of feed and energy and even bedding used.

See also:﻿ How precision farming can cut the footprint of poultry production

Development of the turkey lifecycle assessment tool was funded in part by industry and in part by a grant from Innovate UK, a government body that supports research.

An initial demonstration, held in London on 20 October, found the quality of home-grown proteins was so much lower it made environmental sense to import soya.

Another analysis highlighted that burning litter for energy reduced global warming potential by 20%. It could also cut eutrophication potential by almost 40% when compared with spreading the manure on land, the tool suggested.

Jeremy Hall, group technical director at Bernard Matthews, was a leader on the project. He said initial results had been “fascinating”.

“You can buy two meals using turkeymeat and still halve your carbon footprint in comparison with one meal made with beef,” he said. “That’s quite a strong and powerful position and we can now pass that view to consumers and promote the environmental benefits of turkey.”