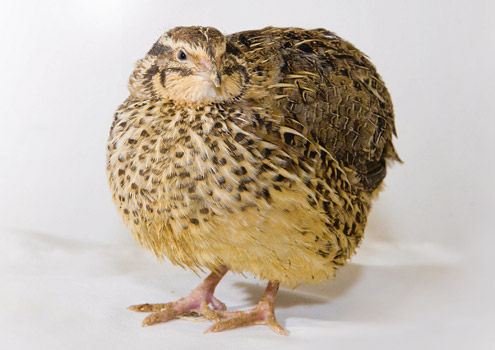 But what sort of challenges does a business face whose success depends on rearing quail chicks that are barely as big as the end of your thumb and only weigh 10g each?

The management of these tiny chicks is the essence of successful quail farming – the only game bird reared and farmed intensively for both eggs and as table birds – so it’s little wonder there is only one major producer in the UK.

But Fayre Game based at Rufford, near Southport, Lancashire, isn’t a company that’s new to farming this active and somewhat flighty creature.

It has over 30 years’ experience dealing with quail – experience which underpins its current operation producing 20,000 dressed quail every week, as well as around 6,000 doz eggs.

Fayre Game holds a flock of around 26,000 breeding birds – including a “free to fly” flock – at its farm near Lytham St Annes, about 30 miles from its Rufford site.

The company produces its table birds from its strain of white feathered quail because they are around 50gm heavier at maturity than the brown feathered birds used as egg producers.

Quail are colony breeders and the breeding birds are kept in an enriched cage system with one cock to five hens.

All eggs from the breeding birds are collected on a roll-away system, with each quail egg weighing 13.6-14g. Females come into lay at seven weeks and lay around five eggs a week.

Quail differ from chickens because, after 30 weeks of egg laying, the declining output makes them uneconomical.

Hatchability at Fayre Game is good – 80-83% – and there is an on-going “improvement” programme based on using birds from certain family groups which show superior performance in relevant traits.

“Feed protein levels and brooding temperatures are critical for successful quail breeding. And because they are very flighty and nervous birds, it’s important to move around them with care,” says Ms Sharma.

Mortality rates among young birds are between 5-10%, but the two disease concerns the company has are coccidiosis and ulcerated enteritis.

They don’t vaccinate or medicate, but maintain a high standard of hygiene at all times and a dedicated team caring for the birds.

Fayre Game, whose year-round business has its highest demand for table quail during the winter months, hatches up to 30,000 eggs each week.

Quail chicks, which are very lively and vigorous despite their size, are moved to the rearing site on the day of hatching. Each brooder accommodates 5,000 chicks.

A newly-hatched chick produced from a conventional chicken requires 33C compared with a quail chick which needs up to 38C on the first day.

The brooder temperature is gradually reduced as the birds grow, but the rate based on experience and the time of year.

“I need to provide chicks with 38C directly under the brooder and around 34C at the edge. We can drop that by about 2C in summer,” says Ms Sharma.

The young birds are reared on shavings and kept close to the heat source by cardboard rings, which are gradually removed as the chicks grow.

During the first week of life, chicks are fed a super-fine starter crumb. Intakes are around 10g a day, rising to 25g a day of a grower diet with around 3% less protein that the starter ration.

Mature male birds weigh about 30g less than females, but during the rearing stage both sexes are kept together.

Adult birds in the breeding flock are fed up to 50g a day to provide adequate nutrition for egg production.

“Handling quail needs an experienced team and on slaughter days we have four trained staff who come in around 6am.

All birds are caught carefully by hand to avoid any bruising or damage,” says sales manager Russell Holdsworth.

The company has a dedicated slaughter and processing line and uses an electric stunner. Birds that are slaughtered and processed in the morning leave the site by early afternoon.

“We do need to keep bringing in new genetics to maintain vigour and performance, and have long-standing relationships with other European quail breeders to enable us to do that when necessary,” says Mr Holdsworth.

The best young brown birds are selected for egg production and are kept on a “free to fly” system, with all eggs collected daily by hand. Young quail start to lay at around 10-12 weeks old.

Birds have access to an outside veranda area and are kept in groups of 5,000 on shavings. Eggs are laid on the floor, but the birds tend to congregate in one area for egg laying.

“Once quail are into a routine and start to lay eggs in a certain part of the pen they continue to do that.

All eggs are collected by hand and the birds get used to that, although it has to be done carefully. We find the birds will move out onto the veranda area when egg collection is under way,” says Ms Sharma.

Laying birds stay in their groups for 35-40 weeks during which time each bird is expected to lay around 150 eggs.

Taken over five years ago by hatchery business Tom Barron, Fayre Game is the only company in the UK that’s licensed to slaughter and process this diminutive game bird.

“We’re seeing consumption of table birds increasing by 5-10% a year and eggs by about 15% a year,” says the company’s sales manager, Russell Holdsworth.

“It’s a very tasty meat and, while it has more flavour than chicken, it isn’t as strong as wild game birds such as pheasant or partridge.

“Quail has mainly been a bird for the niche market and for consumers who are perhaps reluctant to try other game birds, but will start by eating farm-reared quail.

Now things are changing and, as TV chefs and cookery programmes continue to fire the imagination of consumers, we believe it’s something that can only be good for the popularity of quail.”

Fayre Game sells its dressed quail in packs of two or four – all slaughtered, processed and packed at its Rufford base – as well as oven-ready birds that are de-boned and stuffed.

Quail eggs are also in the ascendency. They may be a fraction of the size of large hen eggs, but what they lack in scale they make up for in sheer visual appeal. The rich brown mottling is a useful marketing tool.

“The flavour is the same as a conventional egg, but there’s still a lot more potential for quail eggs to develop bigger markets based on their aesthetic appeal,” says Mr Holdsworth, who launched a new product this year – ready-boiled and peeled quail eggs for use in summer salads and canapés.

Fayre Game has a three-pronged approach to its marketing. One third of its table birds and eggs are sold to multiple retail outlets, including Waitrose and Sainsbury’s; one third is delivered direct to Smithfield Market in London; and the final third is sold through the company’s delivery service supplying specialist retailers, game dealers and farm shops.

But while Fayre Game prides itself on producing quail meat and eggs from UK bred and reared birds, it doesn’t mean there isn’t any competition.

Quail produced in France and Spain continue to be imported into the UK from large-scale producers supplying home markets where quail meat and eggs are more popular and less hampered by regulation.

“The exchange rate doesn’t help and we have to comply with more onerus red tape compared with many other EU producers – it all adds to our costs of production,” says Mr Holdsworth.