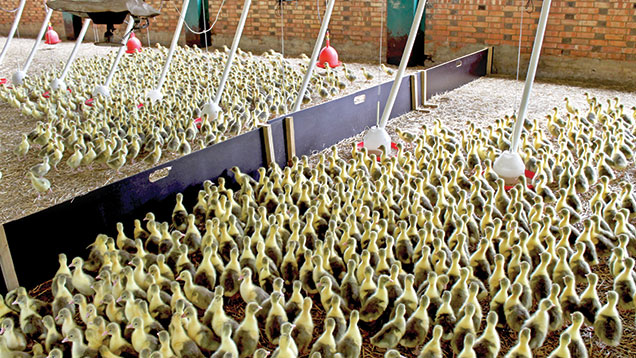 Think of Gressingham and you probably think of ducks – after all, they refer themselves as “the remarkable duck people”, and have a bespoke breed called the Gressingham duck.

It is therefore enlightening to learn that the company is also the country’s largest producer of geese, rearing 90,000 free-range Legarth birds a year on two sites in Norfolk, then processing them through its factory at Redgrave, near Diss.

“We have about half the UK’s commercial geese which are mainly sold as whole birds for the Christmas market,” explains commercial farms manager Andrew Ballantyne.

“Some also go into three- and four-bird roasts, and there is a good market for feet, tongues, offal and feathers.”

The goslings arrive as day olds from the Gulliver Goose hatchery near Attleborough, typically in batches of 5,000.

They are immediately sexed, then separated into manageable groups of 500, with the males going into one shed and the females into another.

The sheds have windowed sides and ample straw bedding, with the air prewarmed to 30C.

The temperature is then dropped by 1-1.5C per day, with the aim of getting it down to ambient temperature by day 21, when the birds are ready to go outside.

They are bedded down daily with fresh straw, and feed is provided ad-lib, with the starter ration made up of wheat, soya, vitamins and minerals.

“Once there, they become a bit rebellious and can take off. But if the imprinting is strong, they will soon come back to the call, which makes stock inspections and gathering them for processing that much easier.”
Andrew Ballantyne, Gressingham

As a rule of thumb, 1kg of starter ration lasts them the first 10 days, then 2kg of grower ration takes them on to 21 days.

Having arrived at 110g bodyweight, within three weeks they will have reached 2kg – although there is typically a lot of natural variation within flocks.

While there is no specific quality assurance scheme for geese, Gressingham applies the British Poultry Council’s Duck Assurance Scheme to all its geese, to ensure the same high standards.

This means things such as bell drinkers, to allow the goslings to get their heads immersed in water if they so wish, natural daylight and low stocking density.

It also means three daily welfare checks by the stockman.

“The day-old goslings are like children,” explains Dr Ballantyne.

“They imprint on you straight away, trying to integrate you into the fold.”

This activity is clear from the second you enter the shed.

Unlike broilers, which move away, the goslings gather round, looking up as if trying to make eye contact. They then follow you around – the more so if you start talking to them.

This imprinting is an essential part of the management, says Dr Ballantyne, as when the birds are ready to go out from the sheds, they will literally follow the stockman in a tight knit pack along the tracks to the ranges.

“Once there, they become a bit rebellious and can take off.

“But if the imprinting is strong, they will soon come back to the call, which makes stock inspections and gathering them for processing that much easier.”

On the range the birds are provided with straw bales, water troughs and feeders, but are pretty much left to get on with it, eating grass as well as continuing to receive the growers’ ration.

“We put a red bell drinker in the field near the troughs, to remind them where the water is. They also like to play with them and can destroy them pretty quickly.”

Contrary to common opinion, they are quite adept at flying, and will easily take off into a headwind. With low fences between each pen, there can be some intermixing, but more often than not the birds will quickly return to their established cohort.

To discourage intermixing, however, males are located a good distance from females, and stands of maize are planted, to restrict sight of each other.

This maize is fenced off until late in the autumn, when it is opened up to the birds. “It takes them a few days to realise they can eat it – buts once they do, it gets trashed very quickly,” says Dr Ballantyne.

“Eating maize also gives a nice bloom to the skin.”

Having low fences and no houses does leave the geese prone to predation. Regular lamping with rifles is carried out to keep on top of foxes, but total mortality is put at 6-8%.

“Black headed gulls can be a particular problem when the geese are still young.”

The ranges provide enough space for 10sq m a goose.

The birds come into their first moult by three months of age, but will not reach sexual maturity before they are sent for slaughter in November and December.

Feed conversion is put at about 7.3:1, and slaughter weight averages about 7.5kg, though some of the males will be nearer 9kg.

The free-range birds are all traditionally “dry plucked”, which gives a more attractive appearance and helps retain the juices during cooking.