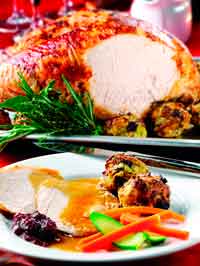 A premium turkey and ham pie, kebabs and stuffed turkey olives are just some of the innovative products battling it out in this year’s British Turkey Awards.

This year’s strong lineup, judged by a panel, included 18 whole turkeys in the prestigious Best Christmas category, which were shortlisted to three. The shortlisted birds were supplied by Usk Vale Poultry, of Pontypool, supermarket Morrisons and Kelly Turkeys, whose KellyBronze is the current holder of the title.

Three bronze birds will be battling it out in a new category for 2009 called Best Christmas Traditional, to distinguish them from the Christmas convenience sector, now largely dominated by ready-basted birds and easy-carve joints sold in disposable foil cooking trays. Morrisons also wins a place in this shortlist with its Luxury Turkey Crown with pork, sage and onion stuffing, along with Bernard Matthew’s Golden Norfolk herb-basted turkey and Asda’s Breast Lattice Joint.

Catriona Lee, chairman of the British Turkey Federation’s marketing committee, said: “We are constantly updating the categories to reflect the way retailers are improving and developing their turkey fixtures.

“This year we also have a new Best Meal Solution category, to reflect how more people are eating at home rather than going out during the credit crunch.”

Turkey designed for the foodservice sector dominates the Innovation category, with turkey meatballs, produced by Snowbird Foods, and cooked, sliced turkey breast in stock, a product from UK Foodhall aimed at schools, being shortlisted along with a dinner party option of ready-to-cook turkey olives from Cranberry Foods.

Other shortlisted entries include kebabs, sausages and flavoured steaks aimed at the BBQ sector, as well as a ready-to-roast stuffed breast from Cranberry Foods and the ever-popular Turkey Drummers from Bernard Matthews Farms.

Winners will be announced at a gala dinner on 24 September at Claridges.