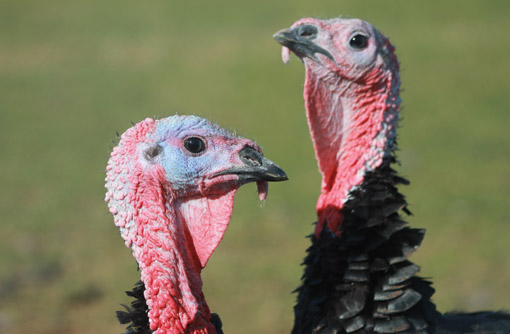 Tackling campylobacter and improving digestion were both hot topics at the recent Turkey Science and Production Conference in Cheshire, as Ken Randall reports

The turkey industry should start taking steps to tackle campylobacter contamination as soon as possible, producers have been warned.

Campylobacter-related food poisoning was a major public health problem in the EU, and the role of poultrymeat was now generally accepted, Diane Newell of the Foodborne Zoonoses Consultancy told the conference.

Campylobacter was the most common cause of infectious intestinal disease in the EU, resulting in about 10 million reported illnesses a year, costing an estimated euro2bn.

“It is only reasonable to assume that turkeys contribute to human infection, but we can’t say how much,” she explained.

The EU was considering what regulations and targets should be introduced to reduce the public health risk.

“The poultry industry needs to urgently address this issue and work with scientists to determine the best approaches to adopt. Current opinion suggests that intervention strategies need to be introduced at all stages, for all poultry.”

On-farm interventions would have the specific advantage of reducing environmental contamination.

“There has been little research on campylobacter colonisation of turkeys, but on the basis of the only comprehensive study, (in Denmark), there are few differences in colonisation characteristics and risk factors between turkeys and broilers,” said Prof Newell.

“Turkey poults appear to be hatched campylobacter-free, and horizontal transmission from the environment into the poultry house is the primary transmission route.”

In the Danish study, 48% of 688 turkey flocks tested positive. Turkeys at slaughter could be colonised with up to 108cfu/g of caecal contents, and neck skin after processing with up to 104cfu/g.

“For indoor-reared birds, the consistent and rigorous application of biosecurity is essential to maintain campylobacter-free flocks.”

In particular, this should include the strict application of hygiene barriers by all poultry farm staff and their equipment, the supply of clean water and the cessation of thinning, she suggested.

“Even the best hygienic barrier cannot always produce campylobacter-free flocks, especially when the environmental burden is high, as in summer. For free range, biosecurity can never be implemented to exclude these organisms.”

Therefore complementary on-farm interventions were required, and these could in future include feed additives, bacteriophages, bacteriocins and vaccines. “But these need considerable research and development, and are long-term solutions.”

Better performance and litter condition can be achieved in turkeys by nurturing the optimum bacterial pollution in the digestive tract, Stephen Collett of the University of Georgia, USA, told the conference.

This had become a significant issue in the wake of the removal of in-feed antibiotics in Europe, he said.

“Dysbacteriosis became commonplace after the moratorium on the use of in-feed antibiotics was introduced in the EU,” said Prof Collett. “These undefined shifts in the intestinal microbiota are difficult to diagnose, yet appear to be associated with visible intestinal changes.”

Low-grade enteric disease was the most common cause for depressed feed efficiency and the development of unfavourable rearing conditions.

“The intestinal tract is where feed is digested and absorbed, so even the slightest deviation from optimal function culminates in depressed biological and economic efficiency.”

He outlined a three-step process that had demonstrated particular promise.

The first was to ‘seed’ the gut of hatchlings with favourable organisms. Since the first organisms to gain access to the day-old gut originated from the parent, steps to control gut health should start at parent flock level, he said.

Secondly, the favourable organisms should be fed with an appropriate organic acid.

And thirdly, undesirable competitor bacteria could be “weeded out” with a type 1 fimbriae blocker. These products mimicked the docking sites for gut pathogens, and diverted them from attaching themselves to the gut wall.

Commonly used values for the protein digestibility of feed ingredients for turkeys may be incorrect, according to Ariane Helmbrecht from specialist additives company Evonik Degussa.

Research carried out in Poland and Germany indicated that, for growing turkeys, protein availability, in the form of Standard Ileal Digestibility (SID) of the amino acids, was lower than expected for soyabean, rapeseed and sunflower meal, but higher for peas and lupins.

Also, the SIDs for amino acids in wheat and maize were different in turkeys to the known values for broilers, which also had implications for formulations.

Because research on SIDs in turkeys was scarce, the digestibility coefficients for broilers had typically been used for turkeys.

“This procedure is questionable due to differences in gut development, and amino acid digestibility depending on age and raw material,” said Dr Helmbrecht.