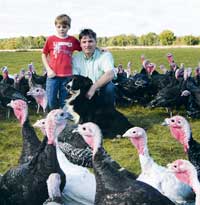 Blackwell’s Farm, situated on 400 acres of the Marks Hall Estate outside Coggeshall 50 miles north east of London, is a model diversified business, with niche products complementing the mainstay of arable farming.

Mr Blackwell sees poultry as the one area where he can add value. “Everything else we sell from the farm – the wheat, the rape – we’re told what we get. But with turkeys we go out and tell the customers what the price is. Poultry is the only product you can set your price – you can market it, you can brand it and you have full control over it.”

As a member of the Traditional Farmfresh Turkey Association (TFTA), Blackwell’s turkeys conform to the “golden promise” which not only dictates how the birds are raised, but the feed upon which they are fed.

“The TFTA has a strict code which is policed by an independent body to ensure you are giving correct feed,” Mr Blackwell explains. “We don’t use any animal protein, it’s all vegetable protein apart from a little bit of fishmeal in the starter.

“We don’t use routine antibiotics or any growth enhancers at all and the finisher ration has at least 70% cereals.”

All the feed that cannot be grown on the farm is sourced from the Marriages Mill at Chelmsford, only 15 miles from the farm.

“It’s a small family-owned feed mill and it costs me a bit more than the nationals, but it’s the way I like to do business,” he says.

Another essential part of the TFTA protocol is that, as well as being slaughtered on farm, birds are hung for 10 days to improve flavour.

“We are one of the few countries in the world that hangs the meat with the intestine in, which gives it more of a game flavour and actually makes it taste like turkey,” Mr Blackwell says. Last Christmas it was so cold Blackwells didn’t need to use refrigerators to keep the birds cold during hanging.

Despite their considerable success Mr Blackwell does not believe he will expand any further. “The worse thing for the industry is for there to be bigger and bigger operations and fewer and fewer people, we want smaller producers and a smaller amount of birds,”

Farmed by the Blackwell family since the 1930s, the operation raises 5200 turkeys, 1800 geese and 350 chickens for the seasonal market as well as growing wheat, beans, peas, rape and linseed.

All the birds raised on the property are slaughtered for the Christmas market.

The farm is part of a countryside stewardship program with margins set aside for wildlife. The operation also includes a vibrant farm shop, selling a variety of produce sourced within a 20-mile radius.

A commitment to maintaining a traditional countryside with a variety of wildlife sharing the farm doesn’t mean the poultry farmer’s bane, the fox, gets an easy ride on Blackwell’s farm.

At the Essex farm foxes mainly target the geese, as the free-range turkeys are brought inside sheds at night.

Despite this, Mr Blackwell admits he has experienced losses from the predators across his operation. “About 15 years ago there was a storm and the electric fence lost its contact. A fox got in and killed about 30 turkeys and spread all the others into the woods.

“I put the free-range turkeys away every night and we now have bigger fences around the turkey compound, as well as electric fences.”

Another method Mr Blackwell uses to help reduce losses is to keep a dog, which he mainly uses to herd the birds, but it also ensures foxes keep their distance when they smell the border collie.

With fox numbers rising, Mr Blackwell also makes use of a retired countryman. “He will bate the foxes for three or four days and then in the early hours he will take them out. He’s got eight in the past two weeks.”