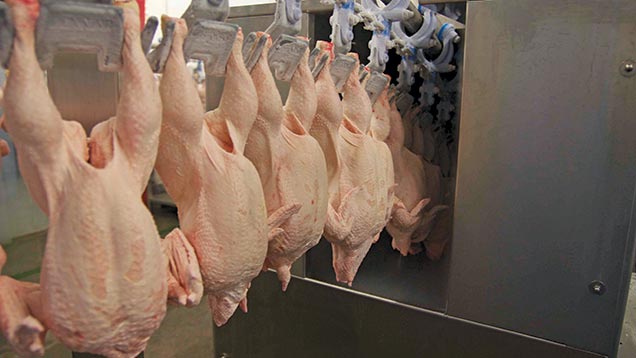 Strict biosecurity and a new rapid test are two of the strategies helping in the battle against campylobacter at Bernard Matthews, as Philip Clarke discovers.

Of all the issues facing British poultrymeat, campylobacter is probably the most “top of mind”, as the sector strives to find ways to drive contamination rates down.

Recent survey results from the Food Standards Agency show that almost 75% of raw chicken on sale in supermarkets still has detectable levels of contamination, while nearly 20% has over 1,000cfu/g – the highest level which the FSA insists must be down to 10% by the end of the year.

Compared with this, the turkey sector is ahead of the game. “Our levels of campylobacter contamination are already compliant with the FSA’s target,” says Bernard Matthews’ group technical director Jeremy Hall. “All the turkeys on our production line have less than 1,000cfu/g – and 90% are below 500cfu/g. Many flocks are negative at slaughter age.”

There are several reasons for this, he explains, not least the strict biosecurity the company operates on all of its farms and other premises.

For example, all production facilities operate a “shower in, show out” policy, including hatcheries, breeding farms and even growing farms. Staff and visitors all have to wear protective clothing and footwear bespoke to each site, with different boots for inside and outside sheds.

Foot-dips are kept topped up at all times, and vehicles arriving and leaving farms are sprayed with disinfectant. Only essential visits to farms are allowed during wild bird migrating season, and all ponds and lagoons near poultry sheds and on free-range units are netted off.

Even the catching teams are required to shower before and after collecting birds, and the transport crates are washed in a five-stage process before leaving the factory, to kill any bacteria.

“This all gives us a health status that is hard to achieve on many broiler farms,” says agriculture director Andrew Ballantyne.

But even more significant in keeping campylobacter levels low in the turkey sector is the fact that factory processing speeds are so much slower compared with chicken.

“All our birds are hand eviscerated. Using techniques we first came across in the US, the dead birds are suspended on three-point hangers and the vents cut around using a short-bladed knife, and then the viscera removed,” Mr Hall explains.

“Unlike broilers, which pass along the line at four times the speed and involve a lot of splashing and mess, the process with turkeys is far cleaner. If any faecal matter comes out, it generally drops down into the water trough below.”

Hand evisceration also means the carcasses can be washed with clean potable water every 15 seconds, which prevents the attachment of campylobacter to the skin.

But despite the fact contamination levels are lower in the turkey sector, Bernard Matthews has been at the forefront in the drive to control the problem, working closely with the Food Standards Agency, Defra and the Campylobacter Working Group to beef up the arsenal.

One particular action has been to help develop a new rapid test kit, which it has done in collaboration with fellow turkey producer Faccenda, the Food and Environment Research Agency (Fera), Foresite Diagnostics and sensor systems manufacturer OptiSense.

Based on lamp technology and DNA amplification, the test can return a positive or negative result for campylobacter in a turkey flock from a boot swab or litter sample within just 40min. This compares with 24-48hrs using the current sampling system, whereby samples are sent by post to the Agri-Food and Biosciences Institute (AFBI) in Northern Ireland. It can take longer in December.

The new test also has the potential to be much cheaper. It is estimated to cost about half the £14 a sample charge the sector currently faces.

“Speed is of the essence, especially in the broiler sector, where a flock may be culled and processed before any test information has come back,” says Mr Hall. “Even in the turkey sector, if we know the status of the flock before it arrives at the factory, it can help us in deciding which order we process birds in, or even if we need to use other interventions on the processing line.”

The new testing equipment, which the company believes will play a major part in controlling campylobacter throughout the poultry sector, has already been installed in Bernard Matthews-accredited laboratory, and may be rolled out to regional centres in time, to provide an even faster service for monitoring flocks for the bacteria.

Bernard Matthews has also been closely involved in the development of rapid surface chilling as a method of reducing campylobacter.

Last year the company carried out over 20 full line trials with the technology in partnership with gas supplier BOC and achieved a 90-96% reduction in campylobacter levels on chicken carcasses going through the tunnel. (The FSA had asked the industry to focus on chicken plants first.)

“In our opinion, this is the most effective system, achieving a 1.5-2 log reduction in campylobacter levels.” It has no effect on appearance or eating quality, while it can increase kill capacity at the factory by reducing chilling times by 10-15min.

As such, the company is also poised to install a rapid surface chilling tunnel at its Great Witchingham site in Norfolk in the coming months.

Overall, the low campylobacter rate is a “positive news story”, that adds to the range of factors that should be making turkey meat a more popular choice, says Mr Hall.

“Turkey is the ideal product. It has higher protein and far lower levels of saturated fats and total fats than any other meat. It is versatile, and it is no coincidence that campylobacter-related food poisoning goes down in December, at the time of year when consumers switch out of chicken and into turkey.”