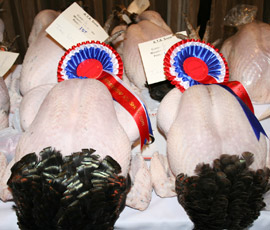 The UK’s premiere turkey association, the Anglian Turkey Association, has celebrated 50 years since its establishment with a gala dinner and turkey show at Stoke-by-Nayland Hotel, Colchester, Essex.

ATA chairman Richard Beanland told guests that once there were similar similar shows organised in Wales, Wessex and Yorkshire, but the ATA’s show was last survivor.

Eighty turkeys were presented traditionally show plucked, leaving the bronze or white feathers around the neck, and competed for the many silver award trophies dating from the 1950s.

The show and banquet was attended by a record number of almost 250 people and saw roast turkeys piped into the room, reminiscent of a Burns Night haggis supper.

The ATA now has around 150 members from across the country.