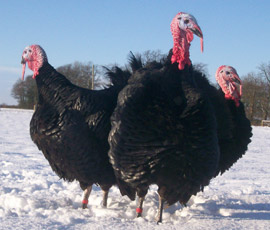 Turkeys and waterfowl have, for the first time, been added to the Rare Breeds Survival Trust’s poultry breeds “at risk” list, increasing the chances of them benefiting from the organisation’s conservation work.

The UK Poultry Breeds at Risk list was introduced in 2011 as a standalone from the more general RBST Watchlist, recognising the importance of poultry to the UK’s genetic farm animal resources.

An RBST working group, including representatives of the Poultry Club of Great Britain, the Rare Poultry Society, the Turkey Club, the Goose Club, the Domestic Waterfowl Club and British Waterfowl Association, agreed the guidelines for acceptance of breeds on to the list.

“Having the opportunity to work with all of the leading poultry organisations in compiling the list has been, for RBST, as significant a development as compiling the list itself,” said RBST operations director Ian Nutt. “Important dialogues have been established that will form the foundation for future conservation work.”

The organsisation notes that not all of the breeds listed are considered to be numerically rare, but all have been assessed as fulfilling RBST criteria and may face other threats to their populations within the UK.