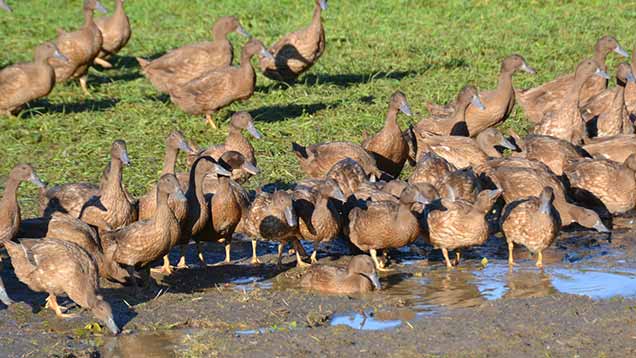 South-West egg producer, Blackacre Farm, has won a coveted 3-star award in the Guild of Fine Food Great Taste Awards 2015 – the only producer from the egg sector to receive top honours in the so-called “fine-food Oscars”.

In total, some 10,000 products were entered into the awards by food producers from the UK and abroad, covering the whole range of food types. Over 400 judges came together on 49 occasions to blind-taste the offerings, with just 130 products (1.3%) getting the 3-star award.

See also: Top tips for getting into duck production

Blackacre Farm was one of them, recognised for its Waddling Free free-range duck eggs.

Run by Dan Wood and his wife Briony, the family has been farming at North Cheriton in Somerset for 35 years. The flock of 2,400 Khaki Campbell ducks only arrived on the farm last year, to complement the 3,000-bird flock of free-range hens.

The judges described the duck eggs as “proud-standing and succulent” and “a beautiful firm egg with a burst of sunshine in the yolk”.

The only other poultry product to receive a 3-star award was Kilnsey Park’s smoked duck, from the Kinley Park Estate in Yorkshire. One of a range of products from the estate’s smokehouse, was described by judges as “a soft and gentle delight…flavours come through in waves, almost dancing with each other”.

A number of other poultry producers received 2-star awards this year – endorsing their products’ quality and taste.

* Dan Wood is also a finalist in the Farmers Weekly Poultry Farmer of the Year award. Profiles of all three finalists appear in this month’s Poultry World