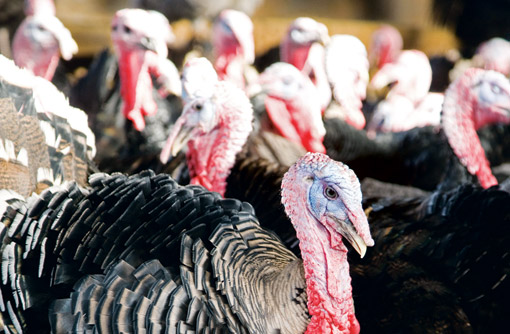 Turkey feed was top of the agenda at the 6th Turkey Science and Production Conference in Cheshire, as Ken Randall reports

With feed costs rising, growers and integrators need to fully understand the effects of making changes to ration formulations.

“Feed ingredients have more than doubled in the last five or six years,” said Peter Woodward of Aviagen Turkeys. “We’re seeing more volatility in prices brought about by climate change and patterns of demand in developing countries.”

The fact that more maize in the USA was now going into bioethanol than into animal feed was a scary statistic, he said.

“The effect on our industry is pretty dramatic, since 60-70% of the production cost of a turkey is based on feed. Profitability is being squeezed, and we’re all under pressure.

“Every nutritionist is getting asked: ‘Can we reduce feed costs?’ The answer is ‘yes’, but if we don’t do that properly, were going to sacrifice performance.”

Producers had to ensure that when they made feed changes, the implications were known and calculated.

In one trial, feeding a lower-density feed, costing £10/t less, actually cost the same per turkey, due to higher consumption, but resulted in lower breast meat yield. But if the price difference was £15/t, the cost savings would exceed the losses on breast meat.

“In order to optimise feed costs, we need to know how turkeys will respond to changes in feed formulation. There is a dearth of good data on turkeys,” said Mr Woodward.

For a turkey grower, optimising profitability could be a simple matter of matching feed costs against resulting performance. For integrated businesses, the decision process was much more complicated and required sophisticated modelling to ensure least-cost decisions were made as part of an overall solution.

There was a danger that integrated businesses with separate profit centres – the ‘silo’ business approach – could make decisions at one point in the business which looked good on paper, but could result in a loss of earnings further down the business.

The inclusion of insoluble crude fibre concentrates in turkey rations could have a positive effect on performance and welfare, suggested Manfred Pietsch of German feed specialist J Rettenmaier & Sohne.

“The use of dietary fibre in poultry feed formulations is often a controversial subject among nutrition specialists,” said Dr Pietsch.

“Many nutritionists still avoid the use of fibre, as most sources do not deliver energy for monogastric animals. Therefore, these sources dilute feed formulations, which is not the aim in poultry diets where space costs money.”

However, Dr Pietsch reported on research indicating that insoluble fibre concentrates, by decreasing digesta viscosity, could have a positive impact on intestinal passage rate and subsequently on litter quality. The insoluble fibre could also help to control necrotic enteritis, he claimed.

“It has been established in both university and farm trials that commercially available raw fibre concentrates, based on insoluble lignocelluloses, will improve several performance parameters, such as protein digestibility and carcase yield.”

“One aspect of phytases which is currently under investigation in the scientific world, and which is beginning to be considered from a commercial view, is using phytases in a different way.”

Traditionally, dietary phytase was used to unlock the indigestible phytic acid in grains and oilseeds, making the phosphorous available to the animal.

“This reduces the use of inorganic supplementary phosphates in rations, thereby saving money, while reducing phosphorous pollution.”

Mr Bedford reported on the results of two trials in turkeys that indicated there was an improved performance in response to much higher inclusion rates of phytase, even when phosphorous was no longer a limiting factor. Liveweight gain and feed conversion were significantly improved.

While the release of phosphorous by the use of phytase had always been linked to the destruction of phytic acid in the digestive tract, the benefit of phytase had “always focused on the former rather than the latter”, said Mr Bedford.

There were three mechanisms by which ‘super-dosing’ with phytase might improve performance: