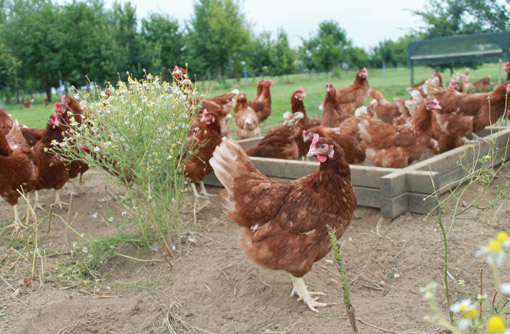 Feather pecking is a common problem in free-range laying flocks, but what can producers do to address it? Olivia Cooper reports

Good feather cover is critical to bird health – without it birds get chilled and more prone to disease, and ultimately don’t perform well. Combined with feather pecking and you could end up with open wounds and possibly even cannibalism.

With a ban on beak trimming looming in 2016, getting on top of feather pecking is critical, says Stuart Young, a vet with the West Country Layers Association. “Feather pecking can be very upsetting for a flock manager; it affects both the physical and mental welfare of the birds. Although you still get feather pecking in beak-trimmed birds, it does reduce the damage caused,” he says. “We may need to lobby against the impending ban, as it may not be in the birds’ welfare interest.”

According to Sarah Lambton from Bristol University, feather pecking is generally accepted to be redirected foraging behaviour, not a sign of aggression. “Aggressive pecking is usually directed towards the head and neck of another bird, and the motivations are not the same as those underlying feather pecking.” Vent pecking can also be unrelated, as it tends to occur at onset of lay, and can occur in otherwise well-feathered birds.

Feather pecking can vary from mild (ruffled feathers) to severe (bald and bleeding birds). “It is estimated to cost the free-range egg industry £12m a year in deaths alone,” says Dr Lambton. “A UK survey found that 65% of farmers had identified injurious pecking in their own flocks. In the same study, researchers identified severe pecking in 69% of flocks at 20 weeks, growing to 86% at 40 weeks.”

The causes of feather pecking include lack of foraging stimuli, diet and feed composition. “But it is multi-factorial – there’s not one single thing that is likely to bring it on.” However, ensuring dry, friable litter will encourage ground pecking, which is important bird behaviour, says Dr Lambton.

Diets that are low in suitable protein and fibre are likely to increase the risk of feather pecking, as are pelleted feeds. “Mash takes longer to eat, so it is much better,” she adds. “Dietary changes are also a huge factor; in one study the risk of injurious pecking increased 60-fold with each diet change during rear.” Other risk factors include unexpected events, flighty flocks and disease.

“In the Bristol Pecking Programme we trialled up to 46 management strategies on 53 treatment farms, compared to 47 control farms,” says Dr Lambton. “The more strategies we implemented, the lower the levels of pecking, and the results helped us to develop the FeatherWel guide, which has just been published.”

To identify feather pecking on farm, producers should spend 10 minutes watching and listening to their flock. “If there’s bad pecking you’ll hear them screech,” she says. Instead of just looking for extreme feather loss, they should look for apparently well-feathered birds that might have signs of gentle feather pecking – as that could lead to more serious pecking in time. “Prevention is better than cure – injurious pecking is very difficult to stop once it’s started, so you need to implement management strategies right from the start, and act quickly if you see signs of pecking develop.”

To promote foraging behaviour, producers should ensure the litter is dry and friable, and scatter grit or grain widely to encourage ground pecking. Straw bales can provide a focus for pecking, and as they break down will improve litter quality, says Dr Lambton. “Go in and rake the litter up, and give birds access to the litter as soon as they arrive in the shed.”

Often producers will pen birds on slats for a while after arrival, to reduce floor eggs. But that increases stress and, given the higher stocking rate, can lead to feather pecking. “Farmers who allowed immediate access to the litter said their flocks were much happier, and they didn’t have any more floor eggs as a result – you just need to spend a bit more time with the flock as they come into lay.”

Encouraging good pecking by hanging bits of string and haynets, or introducing pecking blocks or a halved tyre full of sand, will all help reduce injurious pecking, she adds. “And add in fibrous foods, like carrots and barley husks. If you do have to change the diet, try to avoid cutting protein, and make sure there are other things for the birds to do in the house at the same time, like accessing a few pans of their old food, to minimise stress.”

Other ways to reduce stress include getting the flock used to unusual events, by playing a radio and altering your usual routine, says Dr Lambton.

Adopting stringent biosecurity should reduce disease and mites – and revisiting the house design is also important. “Are the ramps down to the litter steep and narrow? Look at your perches – they should be more than 40cm apart so that the cloaca is not presented at eye level to the birds below.”

Bell drinkers have been found to increase the risk of feather pecking, with nipple drinkers preferable, she adds. “Nestbox lights are also a risk for vent pecking – turn them off after training, or don’t use them at all.”

While all these management strategies work equally well whether the birds are in rear or in lay, it is the transition to lay that is the most stressful period for the hens, so producers should take every step possible to minimise that stress. “Have the same house layout, lighting and feeding regime as the rearer if possible, and try to avoid mixing different groups,” says Dr Lambton. “Talk to your rearer and get them to encourage ground pecking to avoid the hens learning feather pecking behaviour early on.”

Allowing the birds access to a range during rear, and getting layers to range well is also extremely beneficial, she adds. “The more a flock ranges the less likely it is to show injurious pecking.”

According to Bristol University’s Dr Claire Weeks, only 30-40% of free-range hens actually use the range, with a spread between 4% and 80% on different farms. “The larger the flock the less often they range and the less time they spend on the range. Unless there’s something to keep them out there, they won’t stay out for long.”

Enriching the range with natural or artificial cover, including close to the popholes, will encourage the birds out, says Dr Weeks. “Get down low and look through the popholes, to see what it looks like to the birds. Is it inviting or barren? Is it easy for them to jump out or is there a big barrier to get over?”

Avoiding running chain feeders too frequently during the day will encourage birds to stay out on the range for longer, she adds. And there they will be able to supplement their diet with insects and seeds, ensuring they meet their dietary needs.

Producers should check they haven’t run electric wires in front of popholes, and ensure the area outside popholes is well drained, to keep litter clean and dry. Although allowing young birds in rear to range does present a disease risk, it is still better to expose the birds to the range, even if it’s just for a few hours each day, says Dr Weeks. Alternatively, they could install verandas outside the popholes, as a half-way house between the range and the shed.

“I think verandas have got so many advantages; I can’t see why they’re not used more in this country – they are common practice in Switzerland and Austria where the weather is bad.”

Producers should score their hens every couple of weeks, and keep a record of the results, to identify any downward trend, says Dr Lambton. “Score about 50 birds visually, and then pick up five to look for bleeding spots around the vent, as that’s difficult to see without picking them up.”

The neck, back, rump, wing and tail feathers should be scored on a scale of zero (best) to four (worst), and then the scores added together to give a rating out of 20.

0 – well feathered with little or no damage