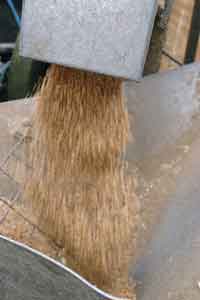 British pig and poultry producers appear to be somewhat divided in their approach to the reintroduction of processed animal protein (PAP).

Asked how the sector should respond to the possible inclusion of PAP in pig rations, 24% of the delegates at Pig and Poultry LIVE 2011 said they should “lobby to use it”, while 55% said they should “reject it” and use that fact to differentiate their product in the market.

Asked the same question in relation to poultry rations, however, and 43% said the sector should “lobby to use”, while only 40% said “reject and differentiate”.

The opportuinity to earn a premium for their product – if the EU Commission allows PAP back into rations, but the UK unilaterally rejects it – was discussed at length.

Tim Rymer of JSR Farming said he saw it as a chance “to put more clear blue water between the UK and the rest of Europe”, and 93% of delegates voted Yes to the idea of investing in a campaign to highlight the advantages of British produce over imports.

James Hook of Hook 2 Sisters was also nervous about rushing into PAP right now. “I think we will use it at some stage, when we’ve got to use it,” he said. “I think that day will come when the soya is scarce.”

But there were warnings that, if the industry differentiated against PAP now, then should it come in at a later date, it would look like producers were using an inferior product.

“If you think one day that meat-and-bonemeal (PAP) will come in, then you can’t take a position today of making a virtue of it not being in,” warned Rob Ward of the Food Marketing Network, pointing to the experience the supermarket Iceland had had when it initially declared itself “GM-free”.

Also, there may not be any financial benefit to using PAP once it is incorporated into feed.

“If PAP became available, it would soon find a place in the marketplace which would be just slightly discounted on the alternative replacement materials. So the direct economic saving might not be a big as you think,” said Andrew Knowles from BPEX.