A renewed need to keep disease out of poultry farms has seen PD Hook Hatcheries review its biosecurity across all sites.

Daniel Dring, group poultry welfare officer at the firm, considers biosecurity the first line of defence, pointing out the simple logic that, if disease is kept out of a poultry house in the first place, then there can be no need to treat it.

“The amount of antibiotics we use on our units is closely monitored and managed to ensure they are only used as a last resort, but we have to be aware of our image and biosecurity plays a big part in that,” he explains.

“We have invested a lot of money in staff training and showing contractors what is expected of them when entering one of our facilities.” 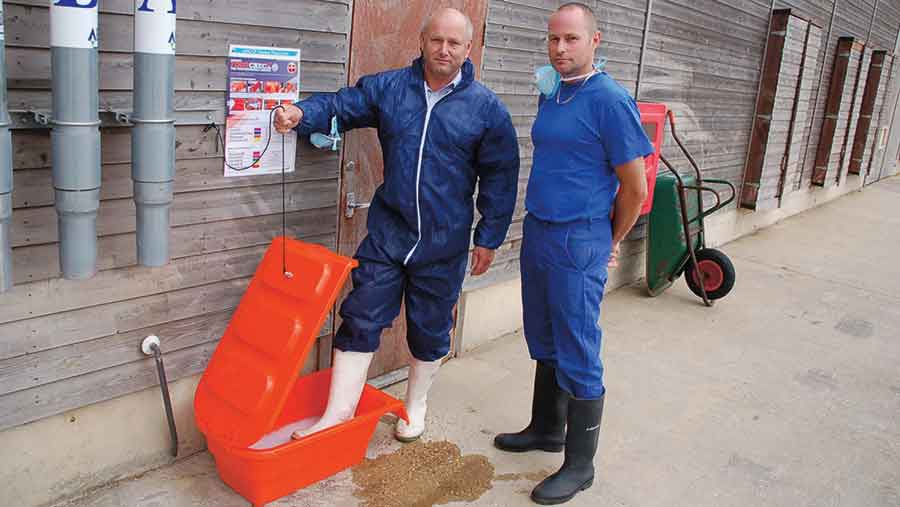 Company farms have several inspections a year by supermarkets, the Red Tractor Scheme and Defra, as well as internal inspections and environmental audits.

Biosecurity starts with a physical barrier before anyone even enters the farm, says Mr Dring.

A good example is the padlocked gates at Galley Hill Farm in Cambridgeshire, which houses 300,000 broilers, growing about seven flocks each year.

Only absolutely essential vehicles are allowed on site – and those that are must be thoroughly disinfected.

As well as signing in at the site office, visitors are shown a printed protocol covering such points as general health, previous contact with pigs or poultry, and any overseas visits.

As part of this they have been installing a new type of disinfectant foot-bath – FootCheck – on all their units.

Outside the site office is the first of such foot-baths.

He says the new foot-baths give a co-ordinated look to units and are bright orange – so hard to miss.

But it is the lid that is the key differential.

It prevents the disinfectant becoming diluted with rain and also keeps organic matter out.

“We seem to get more downpours now and uncovered disinfectant soon becomes watered down and ineffective,” says Mr Dring.

In the autumn on this particular site many leaves would blow into the disinfectant, again making it less effective due to the build-up of organic matter.

The bath has moulded compartments meaning the correct amount of disinfectant.

This is considered important as the disinfectant is renewed at a maximum interval of three days.

In addition to donning protective clothing, staff and visitors are required to disinfect their boots – supplied on site – before entering the poultry house.

Then, once inside boots are changed again, or polythene overshoes put on, between the “dirty” area and “clean” area.

At Galley Hill the “dirty” area is in fact a passage between two houses and there are separate boots and brooms in the “clean” areas either side.

While many of these procedures are common to the poultry industry, the company prides itself on its attention to detail.

The concrete roadway alongside the poultry houses looks immaculately clean, but Mr Dring points out there is no way of knowing if earlier that morning a pheasant has strutted down, leaving droppings.

Equally, this Fenland site, with lakes all around, is a magnet for wildfowl, which frequently fly directly over the unit.

Such events can’t be controlled, so the company has to take every possible precaution.

For instance, spilled feed is swept up immediately to avoid attracting birds or any other wildlife.

Disease can pose a risk to flock health and therefore have a direct effect on performance and margins.

Zoonosis is becoming increasingly high profile within the industry, with campylobacter and salmonella being prominent.

Retailers themselves are under pressure for their products to be produced with the minimum use of antibiotics.

The Galley Hill site is looked after by three people under the guidance of manager Cliff Hope.

He says birds are inspected three times a day, with staff walking through the crop mornings, afternoons and last thing in the evening.

Mr Dring points out the difference between success and failure is an increasingly fine line; good biosecurity is a vital front line of defence.

But in general, he is bullish about the future of the poultry industry.

PD Hook is expanding in line with a 3% annual UK increase in poultrymeat consumption and is rebuilding a hatchery on the Welsh border to help meet this growth.

Less poultrymeat is being imported due to the relative strength of the euro and this is reflected in a strong wholesale market.