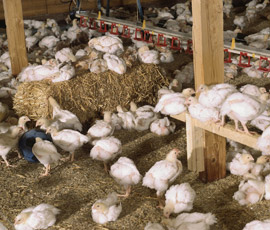 Incorporating enrichments into broiler sheds has done much to boost the public image of modern broiler production, but is not always in the best interests of the birds, according to Daniel Dring of hatchery business PD Hook.

Addressing the Poultry Meat Conference at Stoneleigh, he explained that windows were now installed in 97% of the sheds owned by Hook 2 Sisters, and play bales were used on all farms, including standard birds stocked at 38kg/sq m.

“Windows definitely improve the farmer’s welfare, and birds are more active,” he said. “I think it’s done a great deal to improve the image of ‘factory farming’. “But the drawbacks are increased gas use, especially in the older houses and in windy weather.”

There were issues regarding the birds’ response to light levels, too, as natural changes in daylight combined with the farms’ managed lighting regimes could affect welfare as well as performance.

Mr Dring was generally happy with the addition of straw bales to poultry houses. But perches Mr Dring described as “the work of the Devil” in standard breed houses.

“They are fantastic for birds that are true slow-growing, which have the ability to perch. But the standard broiler post-21 days is too front-heavy to maintain balance.”

With perches provided at the rate of 2m/1,000 birds, there was also an issue regarding perching space as the birds’ natural instinct was to perch at night.

For more on this story and further reports from Poultry Meat 2013 look out for the October issue of Poultry World out soon.