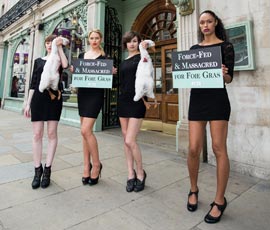 PETA supporters have staged a protest outside Fortnum & Mason – one of the few UK retailers that still sells foie gras – after the release of a film depicting the force-feeding of geese for its production in France.

The demonstrators held up models of dead geese with engorged livers, and signs reading “Force-Fed & Massacred for Foie Gras”, to highlight a video that details how geese are force-fed to artificially swell their livers. The practice is banned in the UK.

Yvonne Taylor, a senior programme manager at PETA described foie gras as “torture in a tin”, and said: “The store’s managing director, Ewan Venters, should hang his head in shame for allowing this barbaric product to remain on the store’s shelves and menus.”

Foie gras is a controversial foodstuff, as it’s produced by force-feeding geese three to four times a day via a metal pipe inserted into their throat. This practice makes their livers swell up to 10 times their normal size.

PETA said that the footage, above, which shows the force-feeding and slaughter of geese, was filmed at a farm represented by the Sarlat Perigord co-operative from which a Fortnum & Mason distributor sources its foie gras.