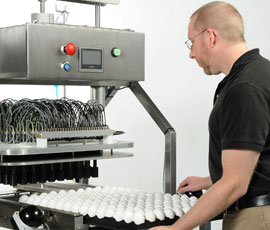 “There has been a need for a smaller Inovoject for some time,” said senior marketing manager, Melinda Freson. “For smaller hatcheries, or those in developing countries that have traditionally relied on manual labour to vaccinate each bird, the availability of a system that is the right size for their hatchery will be a real breakthrough.”

The new Embrex Inovoject m is designed for a throughput of between 12,000 and 20,000 eggs per hour, compared with up to 70,000 eggs per hour for the full-sized machine. It is a semi-automatic system that allows trays of eggs to be both introduced and removed by an operator.

• A floating injection head that adjusts horizontally and vertically to ensure accurate vaccine delivery, whatever the size of egg

• Consistent needle sanitation between each injection.

“The Inovoject m has a number of operational advantages,” said Ms Freson. “Mot least the fact that chicks can be transferred out of the hatchery and into the grow-out environment sooner.”

Pfizer currently has about 600 full-sized devices in operation, though the vast majority are in the USA and Canada.

Full technical details for the smaller Inovoject m will be unveiled for the first time at the International Poultry Expo in Atlanta, Georgia, in January 2012.