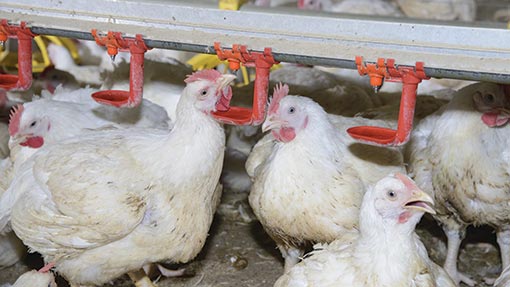 Antibiotic resistance is a growing problem in farming, with many common diseases becoming more difficult to treat. Dr John Rae looks at phage therapy as a potential alternative to antibiotics

Bacterial infections are becoming increasingly resistant to antibiotics, resulting in more costly and longer treatments, as well as higher mortality in farm animals and poultry.

To keep one step ahead, the pharmaceutical world has been encouraged to develop new antibiotics. But this has slowed to a trickle in recent decades, making careful use of existing antibiotics by both farmers and veterinarians imperative in order to slow resistance.

The problem of antimicrobial resistance has also made the search for alternative treatments more vital in order to maintain modern production efficiencies in agriculture.

Phage therapy is one such treatment which is currently gaining global attention as a possible alternative in both human and animal medicine.

The word phage is short for bacteriophage. These are tiny viruses that kill only bacteria by injecting their genetic material into the bacterial cells. This material then takes complete control of the biochemical pathways, producing many more copies of the virus.

Eventually the cell bursts, releasing large quantities of the virus, which go on the attack again – in effect, a self-perpetuating treatment.

Where antibiotics can act like a nuclear bomb, wiping out all bacteria, phages are so specific that they only infect individual strains of bacteria.

In order to develop a treatment, phages are grown in laboratories on bacterial cultures. Once the cells burst, the phages can be purified, removing all the bacterial cell contents. Freeze-dried powders can then be prepared containing the purified phages.

This isn’t just science fiction. Phage treatments are already available for crop, animal and food use in the USA and Korea, and are likely to hit the UK market within the next few years.

Intralytix, a US company, has acquired Food and Drug Administration (FDA) approval for food processing treatments for both environmental decontamination and direct application on foods such as cheeses and poultrymeat, targeting listeria and salmonella.

Other products on the way include pre-catching treatments against salmonella and Clostridium perfringens in live poultry. These await FDA approval, but increased feed conversion rates have been reported by the company.

Enzyme solutions are also available in a number of countries based on phage lytic enzymes which burst bacterial cells.

Currently, US Food and Drug Administration approval for phage-based food safety products is obtained in a much shorter time frame than normal veterinary applications.

There are two main types of bacteriophage, those that burst the bacterial cell (lytic) and those that mesh with the bacteria’s genetic code rather than bursting the cell (lysogenic).

Lysogenic phages have the potential to make bacteria more infectious, and need to be avoided when making phage treatments. However modern selection and purification techniques are capable of selecting efficient bacteria killers.

Other problems include bacterial resistance. Some bacteria in a population will have natural resistance to a phage. Solutions to this include the use of cocktails containing multiple phage strains, which research has shown to be more effective than the use of single strain phage treatments.

Most current applications of phage therapy are in the area of surface treatments, such as factory surface decontamination, food or carcass sprays.

There is little in the way of systemic remedies available, mainly due to the lengthy approval processes for veterinary applications of phage therapy. This is in part due to concern at the use of a self-replicating medicine capable of evolving, but also due to the complex approval process when dealing with a cocktail of active agents.

In 2009 the European Food Safety Authority (EFSA) Biohazards Panel recognised the use of phages as a potential treatment for foods of animal origin.

This appears to clear the way for phage-based food safety treatments in the EU and we may well see these surface applications coming to the UK market soon.

Approval in the EU is certain to take longer to acquire, but phage treatments offer another tool in the fight against antibiotic resistance in farming. Clear benefits in the areas of carcass and food decontamination are achievable.

The EU could perhaps look to phage-based therapy as an alternative to the wasteful flock slaughter measures used in the eradication of salmonella in poultry, for example.

And if the problems relating to developing and approving veterinary applications can be overcome, phage therapy may well offer a real alternative to antibiotics in farming.

Bacteriophages were first identified independently by Englishman, Frederick Twort in 1915 and French Canadian, Felix d’Herelle in 1917. Mr d’Herelle coined the term “bacteriophage” and went on to research the effects on fowl typhoid (salmonella), before developing human treatments in the Eliava Institute in Tbilisi, Georgia (former Soviet Republic).

Phage treatments expanded greatly, internationally, around this time. But they fell into disrepute due to a number of negative scientific reviews and the exaggerated claims by some manufacturers. The advent of commercially-available antibiotics in the 1940s and 50s spelt the end of phage therapy, in the West at least.

However, behind the iron-curtain, work continued unabated. At its height, the Eliava Institute employed over 1,200 personnel producing 2t of phages a week, mostly for the Soviet army.

The West has woken up to phage therapy once again, as antibiotic resistance is dramatically on the rise. There have been several collaborations between former Soviet bloc countries and pharmaceutical companies in the West, and recent research has focused on food pathogen control pre-slaughter including salmonella, campylobacter, listeria and E coli.