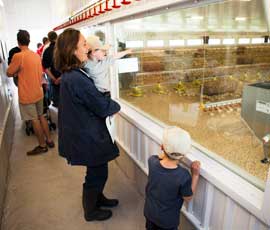 Somerset chicken farmer Nick Bragg has opened his poultry unit to the general public as part of Open Farm Sunday – the first time any broiler producer is believed to have participated in the national event.

Mr Bragg had installed a special viewing gallery in his third and newest shed, which was completed just ten weeks ago. The building houses some 40,000 birds, all grown to Freedom Foods standards.

More than 900 members of the public visited his Frogmary Green Farm on the day, which also included guided farm walks and crop displays.

Richard Jackson from the St David’s Poultry Team and stockman Colin Doble were on hand to answer questions and explain about modern poultry production.

Mr Bragg said the day was “absolutely fantastic” and there were no problems at all with showing the public the poultry sheds. “It was great to connect the public with farming and the feedback they gave was entirely positive.”

One visitor described the chicken viewing area as “well presented”. “It was very interesting to see behind the scenes of a local farm.”

In total, some 335 British farms took part in this year’s Open Farm Sunday, organised by LEAF, receiving an estimated 150,000 visitors.

Would you open your poultry farm to the general public? Have your say on our forum.