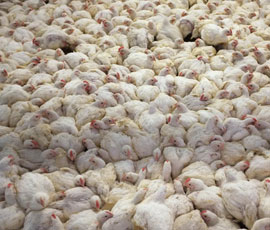 Plans to build four poultry units housing nearly 180,000 birds in the Midlands have been rejected by a planning committee.

But Shropshire Council’s Planning committee threw out the application, after concerns were raised from local residents about the impact of increased traffic to the site and odour.

Since the initial application the council has received 140 letters and emails of objection from residents, largely worried about the visual impact the site would have on the rural landscape.

The proposed development is only two miles outside the Shropshire Hills Area of Outstanding Natural Beauty.

Councillors agreed the development would cause significant noise pollution and substantial harm to the landscape, in particular to grade two listed Golding Hall, which is situated in the same village.

“The proposed development would cause substantial harm to the landscape setting of the Grade II listed Golding Hall, and its garden and adjacent Grade II listed buildings, a group of the highest significance,” councillors said.

“Both directly by being visible in views of and from the group; and indirectly by generating additional traffic disturbance and noise,” they added.