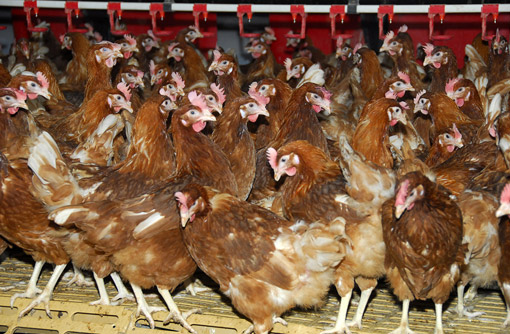 Speaking at a recent East Midlands Poultry Discussion Group meeting in Lincolnshire, Mr Pritchard said dietary changes recommended by some of the leading breed guides, including ISA, Lohmann, Bovan and Hy-Line, did not need to be followed exactly.

“Breed guides are useful, but shouldn’t be followed religiously. They need to be interpreted in terms of local conditions,” he told producers.

While breed companies had shifted towards fewer diets (see table), they still recommended phase feeding to try to match the nutrients in the diet to the requirements of the bird at different phases of lay.

But matching nutrient intake with egg productivity was not necessarily the best way to get the most from a flock. “When you’re thinking about your flock’s egg production curve, you also need to think about egg mass, which is a combination of egg production and egg size,” Mr Pritchard said.

A bird’s peak egg mass output was usually around 35-40 weeks, much later than peak egg numbers – when it is assumed birds are working hardest and need the most energy.

“It is much better to understand mass and then work out how to match a flock’s energy requirements,” he added. “It’s not perfect, but it’s a better indication of flock output than just looking at egg production or weight.”

To reach optimum energy intake, Mr Pritchard said it was important to ensure birds ate enough. “From 16 to 34 weeks, 60% of energy is going towards bird maintenance and bit of growth,” he said. “When comes into lay, 30% goes to egg production, 10% to growth. If a bird eats 120g of 11.6mj feed at 24 weeks, that’s a pretty good match.

“But if that bird eats 10g less, its energy intake is in constant deficit and bird won’t perform.

“You can’t just say ‘stick a better diet in’. You need to get that intake up. It might cost you £12/tonne to get birds to eat that extra 5g of feed, but the cost of increasing energy will cost you £15/t, so it makes sense.”

While getting some birds to eat more was a challenge, Mr Pritchard said ensuring feed was not too fine or too coarse would encourage intake, while ensuring access to water and getting oil and calcium levels right also helped.

“Feeder management is also critical,” he added. “Whenever I’m called to a flock not eating, the normal reaction is put another feeder in. In fact, the best thing to do is take a feeder out, to make the birds hungry and make them work. Less is more in this case.

“Looking at the breeds available, I don’t think they’ve ever been more similar,” he added. “I don’t think you need a specific feed for different breeds; it’s about managing your own farm and how your feed systems are set up. Feed to the flock, not to the breed.”