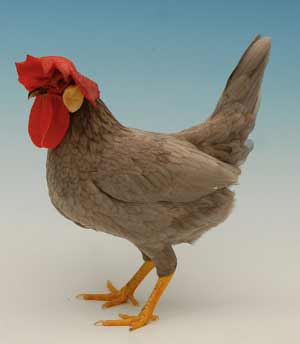 This month our pure breeds reporter heads to South Yorkshire

There has been a remarkable number of new show secretaries across the north this summer and this was the case at the Penistone Show in South Yorkshire.

It’s been in the wonderful hands of Eric Crossland for many glorious years, but Eric recently retired.

Hayley Nicholson has been helping out at Penistone for a few years, but this year she completely took over the rudder with her usual zeal and gusto. She seemed to be competing with the Cheshire with her remarkable championship row with specially commissioned rosettes, prize cards and flower arrangements.

Hayley is a familiar face at shows across the North of England and her son, James, has been doing a huge amount of serious winning with his waterfowl. James hoped to do well with his waterfowl at his mum’s first show. However, he did incredibly well when one of his grand miniature Silver Appleyards won the overall waterfowl championship.


Hayley attracted exhibitors from across the north, but she didn’t expect entries from as far south as Watford. Paul and Rosemary Barrett made this long journey north, as they had made a pact with Paul’s brother Robert from nearby Hoober, to jointly enter their first ever poultry show. Their journey was richly rewarded as their Millefleur Booted bantam won the rare breed championship.

Robert only had to drive round the corner, but he too had a grand day with his Wyandottes and Sebrights. They all had such a incredible debut that these novices will, no doubt, be around for some time to come.

No one was as welcome at Penistone as Don Storey. He came down with Colin Gullen and Peter Christon to honour a long-standing judging commitment. Don took a long time persuading as he’s only recently lost his dear wife Molly; she was his right-hand woman. Molly was much loved around the north-eastern and Yorkshire shows and over the years she must have brewed thousands of gallons of tea for exhibitors in countless village halls.

The judges had remarkably little difficulty in finding both the show champion and the reserve. The reserve went to one of Angela Dupont’s outstanding Pekins. This time she took the top honour with a Mottled, but over the last few years she seems to win with whatever colour she exhibits.

The champion was an equally easy decision with all the judges agreeing that this top award should go to an outstanding Poland belonging to Dawn Johnson Winfield from the Rossendale valley.

Dawn is the undertaker in Rawtenstall. Her meticulous attention to detail could be seen in her pullet which one judge described as “feather perfect”.

It would be very surprising if the officials at Penistone don’t have to get Hayley a bigger marquee next year, as such a vibrant well-organised show is bound to increase its entries.


Visit our online Poultry Winners Gallery to see all the pictures from the event. 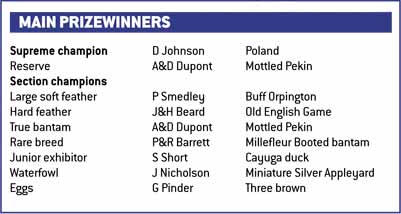