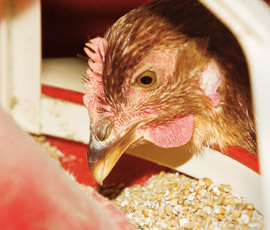 The British Poultry Council has welcomed DEFRA secretary Owen Paterson’s pledge of support for GM technology in a speech delivered to researchers at Rothamsted Research.

Mr Paterson called for Britain to embrace GM research that he said could reduce the use of chemicals, improve yields and protect crops from disease or weather damage.

He also pointed to the fact that livestock systems relied on imports of key commodities, noting that about 85% of EU compound feed now contains GM or GM-derived material.

This was why four major supermarkets had recently dropped their requirements for non-GM feed for own-brand eggs and poultry, he said.

“Without imports of GM crops, our food and particularly meat products would be more expensive.” Owen Paterson.

“The supermarkets were right to make it absolutely clear that the use of such products in no way constitutes a food safety issue,” he added. “Such transparency is vital to ensure that consumers are able to make an informed choice.”

In April this year Tesco, Sainsbury’s, the Co-op and Marks & Spencer dropped an 11-year ban on GM soya in poultry rations, citing soaring prices for non-GM and high levels of cross contamination.

Mr Paterson said that the Brazilian agriculture minister had told him GM soya was 30% more cost-effective to grow than conventional soya.

“Farmers worldwide grow GM soya because it makes business sense for them to do so,” he added. “The adoption rates for GM soya stand at 88% in Brazil, 93% in the USA and 100% in Argentina. Europe imports GM soya from those countries because it makes economic sense for us to do so.

“Without imports of GM crops, our food and particularly meat products, would be more expensive.”

“GM crops are highly regulated in terms of health and environmental safety. The secretary of state’s announcement is a step in the right direction in helping producers and retailers to meet the needs of a growing population.”

But groups against GM had strong words for Mr Paterson. Dr Helen Wallace, director of Genewatch UK, said: “Paterson appears to be deaf, dumb and blind when it comes to any science not peddled by big corporations.

“Only industry-funded research shows any benefits from GM crops, which do not increase yields and are having harmful effects on the environment in North and South America,” she added.