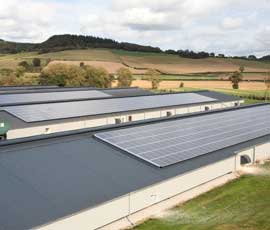 One of the largest solar PV projects of its kind in the UK has been installed on a poultry enterprise in the Midlands, costing £1.2m.

More than 2,300 solar panels were installed at two sites belonging to poultry farmer Edward Davies during the project, stretching a distance of 210m.

Andy Boroughs, managing director of Organic Energy, distributors of solar PV panels who equipped the project, described it as one of the biggest of its kind.

“The Ludlow site is the single biggest installation ever created in Shropshire and we believe the Powys array is probably the largest in Mid Wales too,” he said.

“On current reading, the system has reduced electricity usage at the sites by 65% and the installation has exceeded its predicted energy capture by 10%,” he added.

Installer, Martin Dowley of renewable energy company 7 Energy, said he was delighted with the performance of the installation.

He said in total the sites produce approximately 433,472kWh each year. As the average poultry house uses between 3,000-4,800kWh per annum he predicted the whole system could generate enough power for as many as 144 homes.

It took a year in the planning stage, but once permission was granted and the groundwork was completed, the installations were finished within four weeks and just in time to beat the FIT (Feed in Tariffs) deadline.

“The Ludlow site, where the buildings face east-west, was not suitable for a roof installation, so we have created a ground-mounted system which consists of a single framework on a concrete base,” Mr Dowley described.

Within eight years the build should start to pay for itself, generating 30.7pence/kWh of electricity produced.

“We wanted to look at renewable energy options to hedge our electricity costs,” Mr Davies said.

“We installed SCHOTT Solar PV panels because of their resistance to ammonia which can be an issue, and so far it’s working very well.”