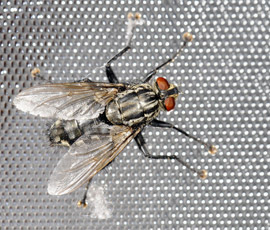 Two poultry farmers convicted for environmental offences relating to an infestation of flies, estimated to number six million at one point, have had fines cut following an appeal.

Herbert Persey, who farms a 9,000-bird free-range unit in Collumpton, Devon, with his son James, pleaded guilty to failing to comply with an abatement notice requiring the control of a fly infestation in 2011. They were originally fined £9,500 each.

But the fines were reduced to £5,000 apiece, plus costs of £4,842 for the original case and £4,400 for the appeal, in recognition that the pair had got the fly population under control.

Local media reports from the original conviction said that the nearest homes were only 175m from the sheds, and had suffered from thousands of flies in their living rooms and kitchens during the infestation.

Herbert Persey said that, at the time of the abatement notice, birds were in the shed. Cleaning out the deep pit system – a long trough underneath the birds’ perching area – would have compromised their health and welfare.

He added: “Most advisers, including DEFRA and their own professional witness, Clive Boase, do not recommend cleaning out [mid-flock] as it leads to fly problems a few weeks later.

“After we had the abatement notice East Devon Environmental Health visited and insisted that we clean out and change our spray routine. This led to a fly problem and then prosecution.”

The farm was found to have breached three parts of the abatement order, out of a total of 16 conditions imposed. These included: