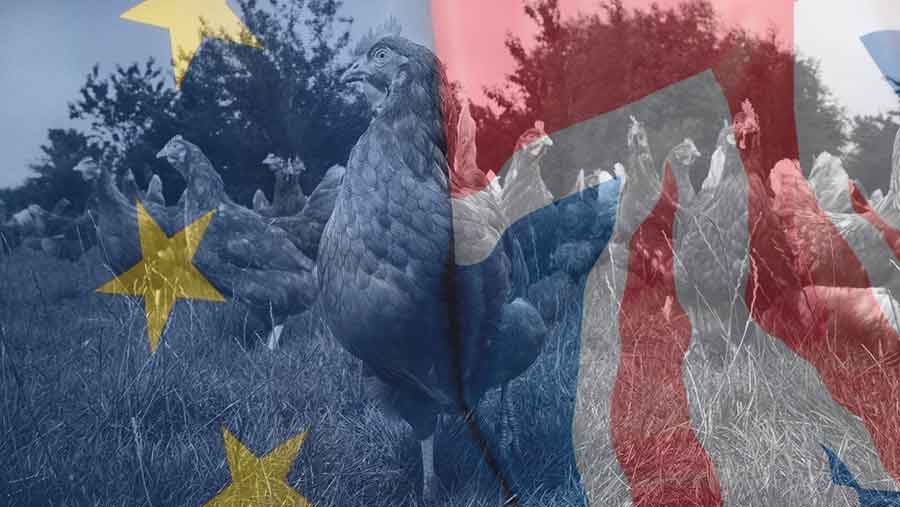 The twenty-third of June was hailed as a new independence day for so-called Brexiteers. For those who supported our membership of the European Union, it was a disaster.

Whatever side of the argument, the months and years to follow present a huge headache for policymakers in untangling near half a century of ever closer integration with the Continent.

There will be business disruption, and investment will likely be stalled in the uncertainty that follows.

It is an unprecedented situation, according to NFU director general Terry Jones. “This is the first trade negotiation in history where we start with full and free access and work backwards from there.”

In early September, he chaired a meeting that included representatives from the farmers union, the British Egg Industry Council (BEIC) and British Poultry Council (BPC).

The idea was to flesh out policy to take to government as it begins the process of withdrawal from the European Union.

The priorities for poultrymeat and eggs have their similarities, but in practice they are quite different.

With chicken, it is maintaining the market balance that unencumbered trade with Europe brings. And as part of the EU, there are trade agreements with third countries across the world that could have to be renegotiated after Brexit.

Maire Burnett, of the BPC, said that, despite being the fourth largest producer of poultrymeat in the EU, Britain is not self sufficient. Breast meat is imported while we send dark meat to Europe and beyond.

This trade makes up the balance of a bird’s value, and the ability to easily export poultrymeat was a vital requirement for her members – as was maintaining trade without disruption throughout the withdrawal negotiations.

Another consideration was the UK’s position as a leading producer of genetic poultry stock – 90% of which is currently exported.

Ms Burnett explained that over 100 countries had health certification agreements in place with the UK. Any disruption to this status could be hugely damaging to confidence.

“We need to be able to retain and use those certificates the day after we leave the EU – that is going to be a huge task for Defra.

“We are very concerned that will be some disruption to trade – that cannot be allowed to happen.”

For the egg sector, protecting British farmers from imports produced more competitively as a result of lower welfare standards is the priority.

Mark Williams, BEIC chief executive, explained that the UK was a major producer of eggs within Europe.

But, like poultrymeat, it was only around 85% self-sufficient. The Netherlands is the biggest supplier, producing about 60% of the egg Britain imports.

“The Dutch have got a great interest in maintaining that relationship,” said Mr Williams.

While farmers supplying the retail sector could expect little immediate disruption, there were “real concerns” about the egg products industry.

He explained the sale of agricultural products to British consumers made a great bargaining chip in trade deals with countries we wished to sell services, such as banking, to.

“Are they going to be produced to our standards? It’s our job to ensure the government is held to account on that.”

Mr Williams warned that any impact on the egg product market would ultimately have a knock on effect for the shell market.

“As part of the EU, when there is an outbreak of AI – and we’ve seen four in the past two years – trade with the EU has continued without any disruption,” said Ms Burnett. “Will that continue post Brexit? We’re not sure.”

Both the poultrymeat and egg sector rely heavily on EU migrants. Approximately 40% of farm labour and 60% of packing centre staff are European, according to a BEIC estimate.

The turkey trade is also highly dependent on migrant labour travelling from Europe for the final weeks before Christmas. An estimate supplied by Derek Kelly, of Kelly Turkeys, suggested their turnover could be damaged by more than 50% if that access was withdrawn.

He added some 90% of European workers would return year after year for the season, providing a reliable source of labour.

Some 70 industry representatives attended the NFU’s Brexit meeting. Delegates were given the opportunity to participate in a live survey, with the headline results revealing some priorities.

“Things will change – we know that, but we don’t know when.”

He explained that, until Article 50 was triggered (beginning the formal exit of the EU) his office would continue to work with farming unions to lobby for European farmers’ interests.

Once Britain withdrew, there would be less certainty. Mr Potts said maintaining relationships across Europe would be important. Australia, New Zealand and Norway all had offices in Brussels.

“Everybody realises the importance of the EU as a trading partner. Through these uncertain times, we will continue representing you and your views, but we do realise that once Article 50 kicks in attitudes may change and then after we leave there is a great unknown.