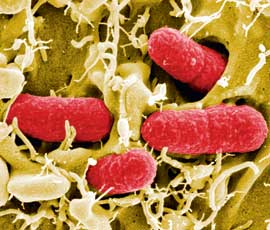 A report has said an estimated 282 people in the UK and 1,519 across Europe are killed every year by an antibiotic-resistant form of E coli, acquired from chickenmeat.

The figures were reached by using data from the Netherlands, which found 56% of ESBL-resistant genes in a human E coli strain were identical to genes found in E coli present in retail chicken.

These findings were extrapolated in a separate study to provide estimates for the rest of Europe and individual European countries. Although, in reality, the number of matching genes in the bug will vary by region.

The Netherlands is the only European country to have published such an enquiry.

ESBL-resistant E coli is a bug that has built up resistance to third-generation cephalosporins, an antibiotic used both in agriculture and human medicine. They are classified as “critically important” by the World Health Organisation.

However, the British Poultry Council said the Dutch data couldn’t be compared, as the use of cephalosporins in the UK’s poultry industry had been subject to a voluntary ban since 1 January 2012.

A spokesperson for the BPC and RUMA added British chicken was reared to standards that “include rigorous controls of the use of medicine under veterinary supervision”, and pointed to its antibiotic stewardship programme, which aims to properly quantify and better understand antibiotics use in poultry.

Richard Young, policy director at the Soil Association, said these estimates indicated “large numbers of people die of resistant infections due to the overreliance on antibiotics in intensive livestock farming”.

The Soil Association said it had concerns about the use of enrofloxacin and florfenicol, which can also co-select for ESBL E coli.