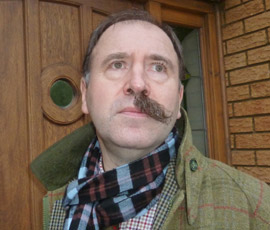 Suffolk-based poultry processor Arthur Diaper is on the sponsorship trail, having shaved off half his moustache to raise funds for military charity, Help for Heroes.

Mr Diaper, whose company Diaper Poultry processes chickens in Stowmarket, grew the moustache for most of 2011. Then on skiing holiday in early January, he amazed his friends by ripping off a false half-moustache on one side, to reveal the remaining real moustache on the other side.

A similar stunt two years ago helped Mr Daiper raise over £2,000 for his favourite charity, and this is a target he is hoping to beat in 2012.

“I would urge Poultry World readers to help me with this appeal as my wife, Moira, is threatening to remove the offending half-moustache at the earliest opportunity and this would obviously have a negative impact on the fundraising,” he said.

Anyone interested in supporting the cause, and justifying Mr Diaper’s intense embarrassment, should send a cheque made out to “Help for Heroes” to Diaper Poultry, Haughley New Street, Stowmarket, Suffolk, IP14 3JN.

* Have you ever done anything whacky for charity? If so, we’d like to hear about it. Visit our Poultry Platform forum thread and share your stories.