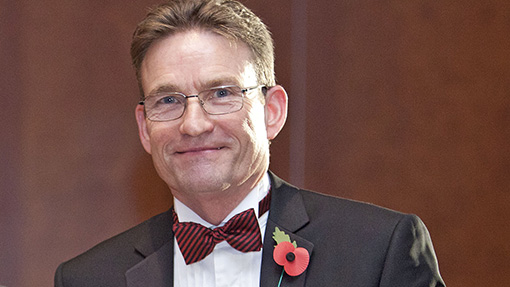 British Poultry Council chairman and Cargill agriculture director John Reed has been named the BPC/ForFarmers Poultry Person of the Year 2014 in recognition of almost 40 years of service to the industry.

Presenting the award at the Egg and Poultry Industry Conference at the Celtic Manor Resort in south Wales on Monday night (3 November), conference chairman Paul Kelly highlighted Mr Reed’s “positive can do attitude”.

He also praised his commitment to encouraging more young people into the poultry industry, in particular his work with the Harper Adams University scholarship programme.

These views were endorsed by the judging panel, which commented on Mr Reed’s “tireless work to broaden the appeal and the profile of the poultrymeat sector, and his work to help develop the careers of others”.

Upon receiving the award, Mr Reed spoke of his first steps into the poultry industry in 1977, when he started as a graduate trainee with Eastwoods.

“As I was shovelling away there, I never imagined that, almost 40 years on, I would still be up to my neck in it”.
John Reed, Poultry Person of the Year 2014

His first job was to muck out a brooder unit with a shovel and wheelbarrow – an experience which gave him good lessons for later life. “As  I was shovelling away there, I never imagined that, almost 40 years on, I would still be up to my neck in it,” he said.

His subsequent career took him to commercial egg producer Daylay Foods, and then turkey processor Moorland Poultry, before moving in 1989 to Sun Valley Foods as agricultural director of the turkey and broiler business.

The role covers the purchasing of feed raw materials and manufacture of poultry feeds, the breeding, hatching and growing of poultry, transportation of live birds and laboratory services.

In October 2010 Mr Reed was elected as chairman of the BPC and has recently been re-elected to the post for a further two-year term.

“I have always been keen to promote what I think is an exciting industry to young people and I would hope that they would have the same opportunities that were offered to me,” he said.

The BPC/ForFarmers Poultry Person Of The Year Award was first made in 1953. It can only be made once to any individual and nominations are sought from the entire poultry industry.