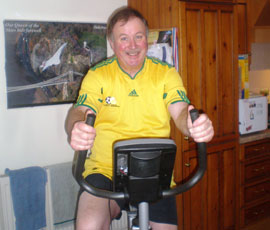 Poultry producers aren’t renowned for their athletic prowess but casting this aside a group of 13 farmers and industry leaders are going to tackle The British 10 kilometre London Run in July to raise money for charity.

For months the team has been in training, with some of the runners admitting to never walking 10km before.

But despite their mixed skills they will be in good company, joining about 25,000 other runners from across the world including Olympic athletes and celebrities.

The team hopes to raise £10,000 for The Teenage Cancer Trust which constructs and operates treatment wards in NHS hospitals to care for the six teenagers that are diagnosed with cancer every day in the UK.

Money raised by the runners will go to a University College of London Hospital unit allowing it to build a new ambulatory unit as well as providing support for the existing unit.

• To dontate to the team simply visit their Just Giving page at www.justgiving.com/runchickenrun