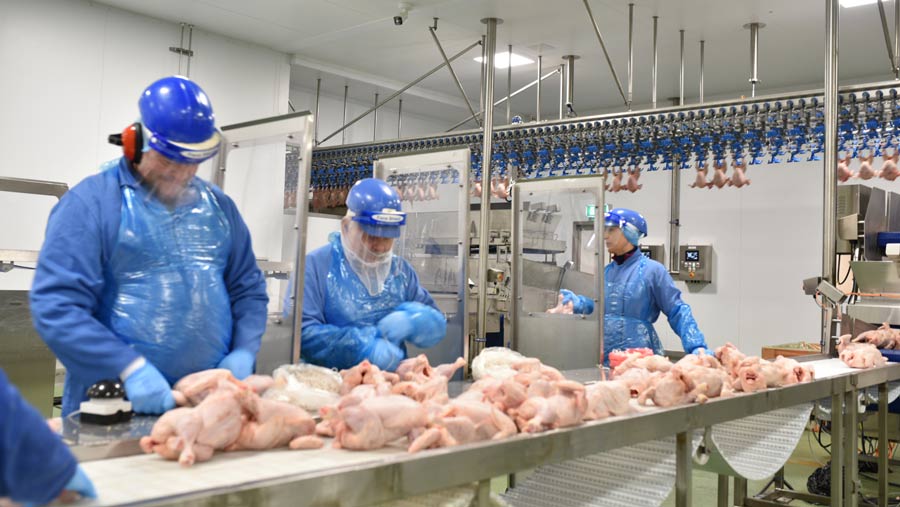 The main UK poultry processors have been taking steps to protect workers from Covid-19 after clusters of cases emerged at meat factories in recent weeks.

Workers at 2 Sisters’ factory in Coupar Angus are the latest to have been affected, with the factory closed on Monday 17 August for at least two weeks following the discovery of coronavirus in nine employees.

According to a company statement: “The facility had previously operated for six months without a single positive Covid-19 case recorded,” and staff safety remained its number one priority. A mobile testing unit was established straight away.

But by the end of the week, the number of cases had grown to 47 and, as well as the site’s entire staff of 900 workers, anyone else connected with them, including schoolchildren, were advised to self isolate until the end of the month.

In previous outbreaks, staff at the 2 Sisters plant at Llangefni, Anglesey were sent home for two weeks in June after more than 200 cases of the virus were confirmed at the plant, which employs 500 people.

And from April to the end of July, Avara Foods, the UK’s third-biggest poultry processor, had recorded 144 confirmed Covid cases, out of 7,000 staff.

Meanwhile, Moy Park confirmed that “a very small number” of staff at its Ballymena plant in Northern Ireland had tested positive for the virus in July.

All three UK companies say they have invested heavily in safety measures to protect their workers, keep factories open and supermarket shelves stocked with poultrymeat during the pandemic.

But trade union Unite has called on meat factory employers to do more, including providing financial support to often low-paid staff who need to self-isolate, so that individuals are not forced to disregard their symptoms because of financial pressures.

Unite national officer Bev Clarkson said: “The health and safety of staff must always come first, but it is clear that in the meat processing industry there are still major issues to be overcome.”

But Moy Park, which employs 12,000 staff and works with 800 farmers across Europe, said it had invested £4m in safety and supportive measures since the pandemic started to protect its staff.

The company has also rolled out thermal temperature screening technology at its sites as another protective step to stop Covid-19 entering its facilities.

Kirsty Wilkins at Moy Park said: “Our key workers are food heroes who have been working harder than ever to ensure we continue to provide society with safe, nutritious food in these uncertain and unprecedented times.

“We are proud of our team and their efforts to feed the nation and keep our supermarket shelves stocked.”

Avara Foods, which has a £1bn turnover and a supply base of about 350 farms, has taken similar measures.

“From the start we’ve made clear, including publicly, that continued operation and operating safely were both priorities,” said communications manager Jim Roberts.

To avert any fear of financial hardship among Avara staff, Covid-related absences are all paid at a minimum of 80% of their wage from day one.

The British Poultry Council said despite “unprecedented challenges” presented by Covid-19, member businesses “have gone above and beyond their call of duty to keep this nation fed by putting food on every table, particularly those who need it most”.

The British Meat Processors Association (BMPA) said Unite claims of widespread exploitation among migrant workers at UK meat plants were “false and misleading”. It said the average number of staff on zero-hours contracts was less than 0.5%, according to the initial results of a survey of BMPA members.