The poultry industry is set to become truly global over the next decade, according to Dutch bank Rabobank, as Andrew Watts reports

Driven by demand in Asia and a plentiful supply of feed grains in South America, poultry is on course to become the “winning protein of the next decade”.

In comparison with other sources of animal protein, poultry comes out on top in almost every metric. It has a competitive cost position, which red meat and fish largely do not, and is widely seen as healthy and convenient, which red meat is certainly not.

In addition, it is not affected by the same cultural or religious restrictions as pork and beef, and has a relatively good sustainability footprint.

According to Rabobank’s forecasts, global growth over the next decade of 30% is quite likely given the rising incomes in the developing world and population growth in all regions. But this will present challenges as demand is not always where the supply is.

Some regions will evolve as international players faster than others. Poultry production in Brazil, for example, is already concentrated in the hands of a few major players, while Europe is ripe for cross-border consolidation.

Globally the sector faces many challenges: volatile feed prices; stumbling economic recovery; political unrest in the Middle East; changing regulations, especially in the key markets of China, Russia and Mexico. The impact of the earthquake earlier this year in Japan is another setback, while Asia is still affected by avian influenza.

How China satisfies its growing demand is considered critical to the development of the world market. It will not want to be exposed to the volatility of the world market, but is likely to protect its position by establishing joint ventures with overseas companies in major exporting regions, such as Brazil.

Such strategies may force other importing countries, such as those in the Middle East and EU, to adopt similar strategies.

The global poultry industry is valued at US$300bn wholesale and $400bn retail, and represents 5% of the world food-market value.

With 34% of the world production volume, poultry is the second largest meat market after pork. Importantly, it appeals to consumers from across the economic spectrum. Eggs are a principal source of protein for those on lower incomes, then as incomes increase people move up to fresh meat and later, processed products.

Population growth means that any increase in demand will not be spread evenly: the developing regions – Brazil, India, Russia and China – will lead the way. Together with the USA, these countries will capture 50% of the global growth in poultrymeat.

Sub-Saharan Africa, Iran, Mexico, Indonesia and the Ukraine will be the other main markets to grow substantially over the next decade.

“Market growth of this scale raises important questions as to how and where to meet this rise in demand,” says the report. “As 50-70% of the cost of production of live broilers is directly related to feed costs, the availability of grains and oilseeds will be an important factor in any success.”

About two-thirds of the global growth in demand is in Asia, where the supply of local grains is limited. Rabobank sees little scope for Asian nations to increase domestic production due to little additional land being available and water scarcity.

“In contrast, the Americas, the Black Sea region as well as sub-Saharan Africa have land available for grain and oilseed production. Countries such as Brazil, Argentina and the USA that have already exploited this potential tend to have a much lower cost of production cost than Asian countries or western Europe.” (See chart Cost of broiler production)

This supply:demand disparity means demand will not be met locally and, as governments attempt to keep inflation in check, it will result in freer trade. Trade in broiler meat doubled in the five years to 2000, from 4.4m tonnes to 8.8m tonnes, and it is now the most traded meat globally. But this only accounts for 13% of all broiler meat demand.

Central to the future development of the sector will be how it responds to competition for resources, namely grains for use in biofuels.

“To retain its position, advances in genetics, housing and nutrition will all be required, as is the development of underutilised land in Brazil, the Black Sea region and Africa to raise productivity,” says the report.

“Improved supply chain collaboration across processing and distribution will also enhance yields. Consolidation will also deliver efficiencies, but it is likely to cause much fear: the top five countries in the global market together have more than 90% share in world poultry exports while the top five importers have only 35% share.”

The poultry market in the EU has also gone through a period of transition in recent years.

Spurred on by the addition of new member states, processors in western Europe were able to access markets in eastern Europe that showed greater preference for brown meat, while those in the East were able to access higher value markets for white meat in the West. This has led to a market with an overall better balance, says Rabobank.

“While imports, particularly from Brazil and Thailand for use in quick service outlets, remain significant, EU manufacturers are adding value through processing which is in turn helping to continue the steady 1-1.5% annual growth in consumption since the 2007. Similarly, a sharp recovery in exports since 2007 has helped raise EU self-sufficiency to 104%.”

Within the EU there is also a major shift in production. Production is stable to slightly declining in Spain, France, Belgium and the UK, while production in north-west and central Europe is growing to the benefit of Poland and Germany.

The Dutch industry retains its position as the largest exporter and its competitive position is seen as secure due to access to low feed cost supplies through the port of Rotterdam, and modern poultry farming methods. Poland is seen as the most competitive and fastest growing poultry producer in eastern Europe, while Romania and Bulgaria are yet to meet their potential.

The long-term market outlook for the EU poultry industry is considered bright in both volume and profitability. The market structure favours domestic players and buisnesses are protected, to a certain extent, by consumer preference for fresh meat.

There will, of course, be some shifts in market make up. Imports are forecast to increase to between 8% and 9% of total demand through further outsourcing to non-EU countries of processed products, while volume growth will come from the developing economies of the East.

“As such the industry will adopt a regional, rather than national, approach. All nations will benefit in some way, but Germany and eastern Europe (Romania and Poland) will be the greatest beneficiaries.”

The markets of western Europe will see increased consolidation and modernisation, but also will seek to protect market positions by responding to consumer concerns. By 2020 “good farming” products, such as free-range and organic are forecast to account for 20% of retail demand.

* Crossroads for Growth: The International Poultry Sector Towards 2020 is produced by Rabobank

Rabobank notes that disease threats such as H5N1 avian influenza are a constant concern, with the potential to damage all players in the value chain. The threat though has been reduced through cross-border co-operation between governments and international organisations, combined with a general improvement in biosecurity.

The poultry sector is equally well placed to respond to consumer concerns over climate change and the carbon footprints of competitor products. Even compared with typical vegetarian products such as cashew nuts, walnuts and beans, poultry has a respectable carbon footprint while compared with beef it is in a different league. Rabobank notes that several retailers have committed to considering this issue more in their future purchasing practices. 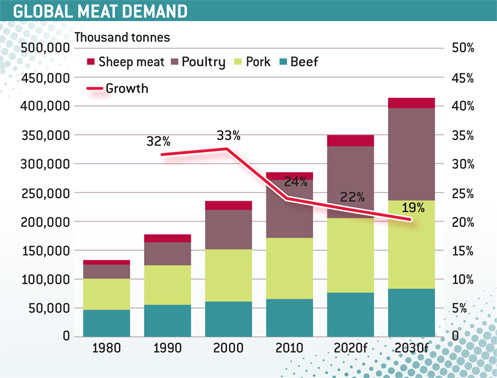 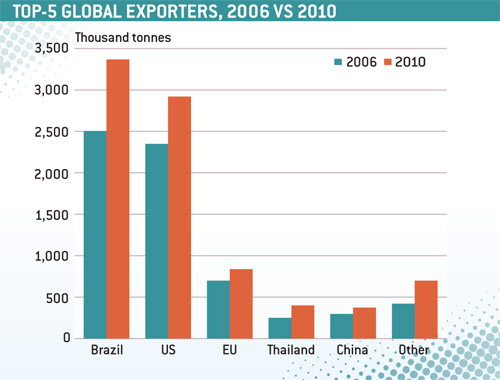 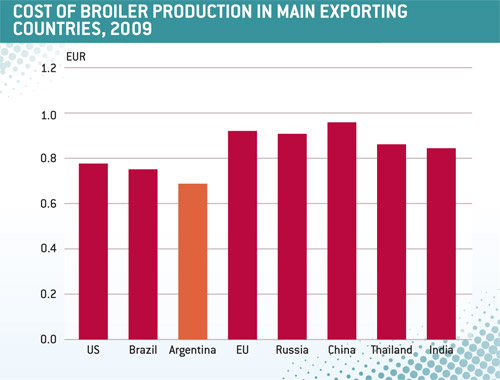 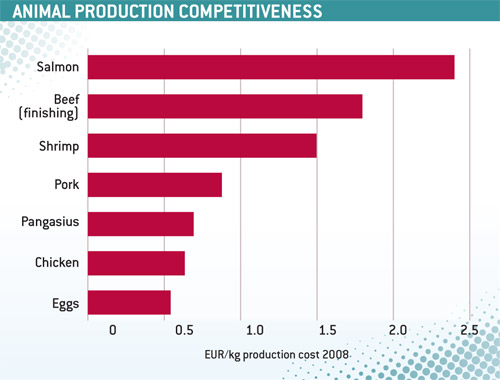