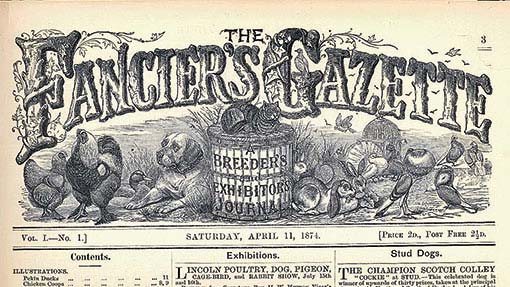 Launched as The Fancier’s Gazette on 11 April 1874 (pictured), the magazine was originally aimed at “the fancy” – being an exhibitors’ journal for those with an interest in showing poultry, pigeons, rabbits and dogs.

The magazine was rebranded The Poultry World in 1907, as the focus switched to just poultry.

This month’s edition takes a look back at both how the magazine has developed over those 140 years and, more importantly, how the poultry sector has evolved from what was at most a cottage industry – “a haven for ex-servicemen” – into a thriving, modern food producing sector.

Of particular note was the magazine’s Eggs for the Wounded campaign during the First World War, which eventually saw more than a million eggs a week sent to Army hospitals in England and France.

The emergence of intensive egg and poultrymeat production when food rationing ended in 1953 was another key development.

April’s Poultry World also reveals the findings of an exclusive survey designed to establish who and what are “the greatest” in the history of the sector.

In the “people” category, the turkey sector came out on top, with Kelly Turkeys founder Derek Kelly voted as the greatest living poultry person, while the late Bernard Matthews was considered the greatest poultry person from the past.

The biggest disaster, not surprisingly, was Edwina Currie’s comments on salmonella in eggs in 1988, and the greatest development was the resurrection of the Lion scheme to repair some of the damage. And the most popular chicken-related song? The Birdy Song by The Tweets.

But, as editor Philip Clarke said, it was “business as usual” for the magazine in April, with all the news affecting the poultry sector, an analysis of the economic contribution of broiler production, an egg marketing special and a technical section packed with useful advice for the modern poultry farmer.