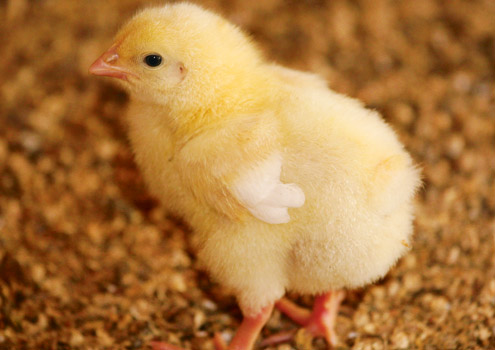 Poussin isn’t something you’d expect to find on the menu, unless you were dining à la carte across the English Channel, let alone something to purchase at your local supermarket.

But Capestone Poultry, in Pembrokeshire, is putting British poussin on the map.

Already a supplier of the vast majority of Marks & Spencer’s organic chicken and free-range poultry, when approached with the proposition of becoming its exclusive supplier of British Oakham Poussin, Capestone leapt at the chance.

“For M&S it is very important that all the fresh poultry they supply is British and as a company we also recognise the importance of locally produced food,” explains managing director Justin Scale.

In total, Capestone produces 5,000 poussins each week. The majority is destined for Marks & Spencer’s supermarket shelves and the rest are supplied to a network of local restaurants and hotels.

Birds are housed in standard broiler sheds at a day old and are fed on a two-stage cereal-based diet, starting with a starter crumb. At 14 days of age this is changed to a pellet.

The birds are stocked at a maximum of 16 birds/sq m, which equates to a maximum of 12.5kg. “These are extremely low stocking rates, more than 50% lower than the maximum permissible rates of the UK’s leading higher welfare standards,” says Mr Scale.

Attention to detail in the rearing phase ensures birds reach 650g each. “Controlling bodyweight for age is key to ensure we hit the desired retail pack weight. We have a great team on board; our brooder manager and the rest of the team work tirelessly to achieve and control these weights,” adds Mr Scale.

The Ross 708 breed selection is seen as imperative to secure high-meat quality. “We selected the bird because it is slow growing and it has high breast meat yield.”

Management is very similar to that of a broiler bird, except the birds are culled much earlier on in their lifecycle.

Lighting imitates a dawn-to-dusk routine. “All of the sheds have natural light. This is supplemented by artificial light that follows outside light patterns,” explains Mr Scale.

Meanwhile, gas heaters keep the temperature inside the shed at a uniform 32C when the birds are first introduced and is slowly decreased to 24C at depletion.

The poussin are killed at 19-28 days of age, averaging 450-550g deadweight and each one is processed in the farm’s small slaughterhouse. “Age is also key to taste, tenderness and succulence,” Mr Scale says.

There is a seven to 10-day turnaround period before new birds come in.

As sixth generation farmers, the Scale family has more than nine decades’ experience of growing poultry, but Mr Scale admits that venturing into a new specialty range hasn’t come without its challenges.

“We’ve had to modify the factory quite a lot in order to process them, because they’re so small. Shackles have had to be made specifically for the poussin and this has become part of our investment plan,” he explains. 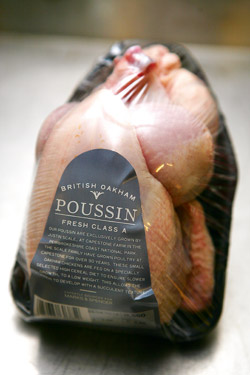 Celebrating the provenance of locally produced food is a cornerstone for many food production businesses, but Capestone in particular has a lot to shout about.

Nestled into the coastline of the secluded Sandy Haven estuary, in the Pembrokeshire Coast National Park, the location has, naturally, become a selling point.

“Consumers will always be interested in the traceability of their purchases and our location plays a huge role,” explains Emily Davies, marketing and PR officer at Capestone.

Ensuring sustainability is equally important, which is why the company became involved with Marks & Spencer’s plan A programme to reduce its carbon footprint and waste.

“Our business ethos is built on being organic, having high standards of animal welfare and our location. We are working to improve the environment around us – after all this is a huge part of our heritage.”

Recently Capestone extended its lines to include Spatchcock poussin and its own Pembrokeshire poussin.

But with many consumer pockets shrinking in the midst of the recession some people might question whether it is the right time to be launching a gourmet meat range.

“People are more adventurous as long as the product is priced right. It is a real talking point because lots of people don’t tend to eat poussin,” says Miss Davies.