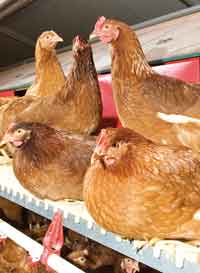 Pressure was growing on RSPCA Freedom Food last month to relax its opposition to higher stocking densities on range layers.

A survey conducted by the British Free Range Egg Producers Association (BFREPA) revealed that up to 640,000 bird spaces would be created by its members if the new stocking densities were given the green light.

At present, Freedom Food sets a limit of 1000 birds/ha for free range flocks, but EU regulations allow up to 2500/ha.

A move to higher stocking densities on range is widely seen as an important potential route towards achieving higher free range production ahead of the 2012 cage ban. At the start of the year, the Lion scheme amended its code to allow range densities of up to 2000/ha. This would enable sheds on existing range plots to be doubled in size, for example.

However the majority of BFREPA members are tied in with the RSPCA scheme and the organisation is so far unwilling to amend its production standards. A research project is underway with Bristol University but this could take several years to complete.

“We haven’t got that long, BFREPA chairman Tom Vesey told Poultry World last month. “Decisions about expansion will nee to be made in 12 months, to allow time for extra capacity to be ready by 2012,” he maintained.

Out of 65 producers who responded to the BFREPA survey, 54 said they would raise hen numbers if the stocking density limit was raised.

One producer had claimed that the uncertainty was delaying his decision-making, as he planned to buy more land to increase output, but was unsure how much land he would need.

Mr Vesey pointed out that further pressure on supplies would come from the ending of a derogation in 2012 that had allowed established producers to continue with a house stocking density at 11.7 birds/sq m, rather than the current maximum of 9/sq m. Some of these producers would not be expanding their houses, he believed, leading to further production shortfalls.