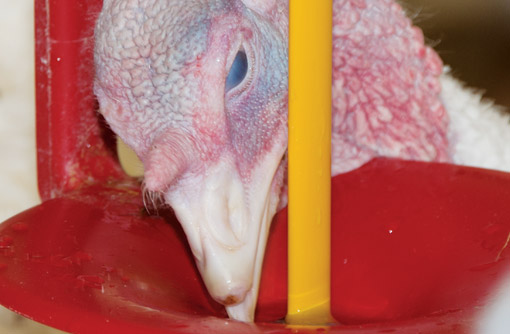 During the three years since he joined the business he has overseen a change of policy towards greater reliance on preventative measures, including vaccination. As someone who came from the chicken industry, Mr Ramsay sees major differences in turkey production. “The main one is in the timescales, with stag production taking around 20 weeks as opposed to six or seven weeks for chickens.

“This fact has a number of implications. The extended life cycle means that the birds are exposed to potential diseases for longer. Cleanliness and biosecurity, therefore, is even more crucial in the production chain. A proper vaccination and management programme is paramount to maintaining a healthy bird.

“Furthermore, as we have the bird on the farm for longer and have fewer crop cycles per year, the cost of production is greater. The investment is high and the potential losses per bird are much greater if something goes wrong.”

On joining the company, Mr Ramsay reviewed a number of areas and, together with the team, he has made improvements in the vaccination programme, as well as ventilation, biosecurity and water sanitisation.

The result has been measurable improvements in performance and a considerable decrease in the use of antibiotics. Among the hens this has amounted to a massive reduction of 94% over three years, and a not inconsiderable 40% among the “brood” stags.

At the same time, the age to finishing among both stags and hens has reduced by 2.4% and 8.6% respectively. Average liveweight has increased among the stags, and feed conversion ratios have reduced by more than 4% in the hens and nearly 5% in the stags.

Mr Ramsay believes that the last statistic is the most significant one, which has helped to contribute to the company’s profitability. He puts the success that Cranberry has enjoyed down to the new regime, but also successful teamwork. “It’s all very well having these policies in place, but if you don’t have the right people to implement them diligently and successfully, then there is no point.”

They then receive inactivated ORT vaccine at four weeks, Dindoral for control of haemorrhagic enteritis at six weeks, and Nemovac for TRT at around seven, 11 and 15 weeks.

Mr Ramsay acknowledges that the improved health status at Cranberry has only been achieved with the cooperation of breeders and partners, including Merial Animal Health. “Merial has become really involved with the implementation of the programme. As well as providing a number of the vaccines, they also supply equipment and training.”

Dindoral is administered via the drinking water. As well as controlling enteritis, Mr Ramsay believes that vaccination has also helped to improve the overall gut health of the birds.

The Nemovac is administered using Merial’s UlvaVac electric sprayer, which allows one operator to vaccinate a large number of birds in a short period of time.