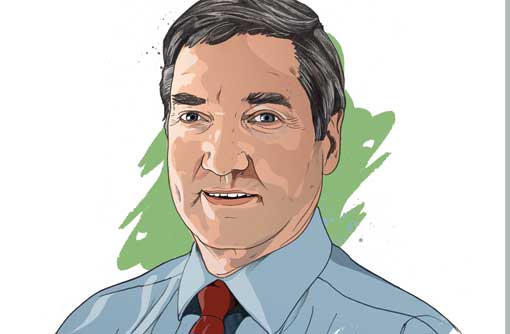 Later this month Peter Bradnock will clear his desk, and possibly his filing cabinets, at the British Poultry Council as he prepares for retirement. Philip Clarke asked him for his parting thoughts

What have been the main changes in the industry over the last 22 years?

Consolidation has to be the main one. When I started at the British Poultry Meat Federation there were 211 member companies. Now there are 62. In the chicken sector it has gone from 34 to just six, and in turkeys from 67 to nine. All this has been through acquisition, not from members leaving the BPC, and poultrymeat production has continued to grow.

The other big change has been in attitudes towards animal welfare. When I arrived I was surprised that animal welfare did not really register with some in the industry. I remember an early meeting with Chicken’s Lib and there was a total failure to engage. But now animal welfare is very much part of the industry’s whole ethos. The industry should be proud of its record, having taken the lead and being ahead of legislation.

Given this consolidation, is there enough competition in the sector?

Yes, there is still strong competition. The consolidation has put the industry on a more even footing with its major customers. That is better than having a large number of weak sellers who have no ability to influence price. I believe there is scope for further consolidation.

Equally there is still scope for smaller independent businesses to develop niche markets. But what we typically see, especially on the chicken side, is a tendency for those small companies to be bought out by the larger integrators, as the retailer wants someone else to look after sourcing that part of the market offer on their behalf.

What do you see as the major threats facing the poultry sector?

Ongoing trade negotiations are one. When I started in 1991 it was all about multilateral trade negotiations. The Uruguay Round of the GATT was coming to a close, and then the Doha Round under WTO was launched. But this has been stalled for some time and the focus has shifted to bilateral trade agreements. The danger is that there will be trade-offs between goods and financial services in return for greater access to the EU for agricultural products under a multiplicity of agreements. We need to be sure it is not death by a thousand cuts.

The other major threat I see relates to the environmental arguments around meat production. Currently poultrymeat does pretty well in terms of its environmental footprint, mainly due to its efficient feed conversion. Intensive production methods also make it easier to manage greenhouse gas emissions, and you can dispose of the manure in least damaging ways.

But there is a major issue around land use change and poultry is often criticised for being a major user of soya, which is associated with rainforest clearance. It’s not as simple as that. In Brazil, trees are being chopped down, first, for illegal logging and second, for cattle ranching. Eventually, after 10 years or more, that land may be used for soya production. The poultry industry needs to stay involved in this debate, or it could be undone by policies that favour ruminants just because they use permanent pasture rather than crops.

What about animal rights organisations? Are they still a threat?

I think the industry has a very good relationship with the mainstream animal welfare groups, such as Compassion in World Farming and the RSPCA. The other more radical groups don’t get the same media attention that they used to, while the British public are better informed. Yes, there will always be isolated incidents obtained by clandestine filming. But generally the industry can hold its head high over its animal welfare record.

And what about high feed costs and government gold plating?

In the early 1990s wheat was less than £50/t – now it is over £200/t. But that’s not the main problem. It is the volatility that is the problem and the inability of the industry to recover each cost increase quickly enough from the marketplace, resulting in losses.

On gold plating, apart from the stocking density rules under the broiler welfare directive (limiting live birds to a maximum 39kg/sq m, compared with 42kg/sq m in some other EU countries), the poultrymeat sector has actually seen very little. This is a good example of what we have achieved by being proactive and engaged with government in drawing up and implementing regulation.

I believe the onus is going to shift increasingly for the industry to self regulate, as EU and national governments will just not be able to afford to police everything. We are already starting to see this, for example through the various assurance schemes. It’s all about earned recognition, so that we can reduce the number of inspections for assured farms and plants with a good track record.

Is the industry doing enough to meet society’s concerns about antibiotics?

The BPC’s Antibiotic Stewardship Programme has now been in force for 18 months and antibiotic use is falling. Some companies are producing flock after flock with no antibiotics at all. There have been calls to end prophylactic use, but you must be careful how you define it. It is not possible to treat individual birds in a flock, so it is unavoidable that some birds with no symptoms will receive antibiotics if treatment becomes necessary. The important thing here is that rigorous risk assessments are made by vets before prescribing antibiotics. Particular classes of antibiotics essential to human health should not be used. But we must also retain access to essential antibiotics for when they are needed in farmed animals.

And what about campylobacter? Could it be the meat sector’s “salmonella in eggs” scare?

Salmonella was also an issue in poultrymeat, but the whole industry pulled together and now has one of the lowest levels in Europe. The same can be done with campylobacter. The whole industry has demonstrated a commitment to get on top of it and we’ll soon get to the point where we have a number of interventions that can reduce the loading. Vaccination and genetic resistance will take too long, but research is showing that rigorous biosecurity on farm can help. There is also much that can be done in the processing plant, such as new surface chilling techniques and, in the longer term, the redesign of plucking and evisceration equipment.

The UK is a net importer of poultrymeat. Should we do more to raise self-sufficiency?

Twenty years ago we imported very little from third countries, as trade it was under national control. But then we had the Single European Market and the UK was opened up to Brazil, and Thailand in particular. I am a great believer in trade, as it facilitates economic growth and efficiency. But imports should be subject to the same production rules as the EU products they compete against.

The UK could improve its self-sufficiency if consumers ate more of the brown meat, but the preference is for breast meat, so we depend on imports. But self-sufficiency is not a useful measure in my view, as it constrains our view of the market to national boundaries, when we have unlimited access to the whole EU.

Should the sector do more to promote itself?

Currently chicken accounts for over 40% of all meat consumed. But the industry must not be complacent. There used to be a marketing levy on chicken, but that was dropped in the late 1990s. Statutory bodies in other sectors have big marketing budgets, but the poultry sector now does very little. I think that needs to change, but it should be on a voluntary basis, not by compulsion.

How would you like to be remembered when you leave the BPC?

As someone who has built the BPC into a credible and responsible body, with a professional and committed team, respected in the eyes of those we are seeking to work with. I’ve been honest and not “cried wolf”, but have always defended the industry when the need was there. I believe the organisation has achieved more by finding solutions, not being confrontational and not conducting our lobbying in the media.

And what plans for retirement?

To spend more time with my wife and family, see more of the UK, but also hopefully to stay in touch with the industry as I will have more time for in depth project work. And then there is the old Alfa Romeo Spider.

Having graduated in commerce and administration in his native Wellington, New Zealand, Peter started in banking with the ANZ Banking Group, then diverted to a career in the civil service in 1973.

A series of promotions eventually brought Peter to Europe in the early 1980s, where he worked at the New Zealand Mission in Brussels, primarily on market access for agricultural and food products.

Following a brief spell back in Wellington, he then moved to Rome, representing New Zealand on trade issues and at the FAO. From Rome it was a relatively short hop to London, where he landed in May 1989 to work as economic counsellor at the New Zealand High Commission.