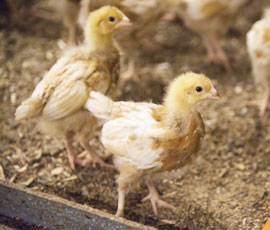 A major UK pullet rearer is looking at changing payment terms to strengthen its financial security as the free-range egg market continues to expand.

Free-range egg producers currently pay for their birds between 14 and 28 days after delivery. But under the planned new arrangement, which could come into effect from 1 January 2013, producers would be expected to pay 50% of the costs upfront.

Speaking to Poultry World, the rearer, who wished to remain anonymous, said he wanted to minimise the hit if producers went bust.

“The industry seems to be moving head-long into expansion. Chick placings are going up and we could get into another situation of over-supply, which would result in egg prices dropping and producers would be unable to make their payments.

“This method would protect us if a producer cancelled their order or failed to pay.”

Rearers are experiencing a surge in demand for pullets since the recent egg price increases. But industry representatives have warned that expansion into an already oversupplied market could spell disaster.

“If you’re also in the position where you supply feed, you could be exposed to £100,000 before anything is paid. It’s very scary. We simply can’t afford not to get paid.”

Under the planned new payment terms, producers would have to pay 20% six months before delivery, and another 30% when the birds are eight weeks old.

But Richard Lewis, a free-range egg producer from Crickhowell, Powys, said many producers would struggle to pay upfront.

“If you suddenly have to pay for the birds in advance, that is an awful lot of money you have to find and it’s a massive upfront cost. I’m very worried. What little cash flow there was is now going to be eaten up by future flocks.

“You’re hoping at the end you are going to break even, let alone make money and to think I will have to put a down payment on the future flock – it’s mad. It doubles the risk for the egg producer and it will scare off many people.”

A spokesman from the NFU said: “As free-range becomes more volatile it is likely that all parts of the industry will look at ways of mitigating risks.”

Got a view on this story? Share it on our forum link