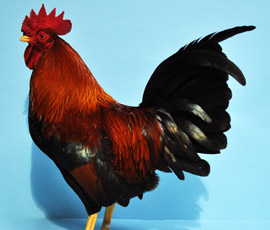 No new bloodlines have entered Australia for 60 years, following an importation ban in 1952. As a result, pure breeds are suffering from high rates of inbreeding and the loss of many breed specific traits, such as dark brown eggs from Welsummers.

An importation project was set up 10 years ago representing over 70 different breeds, including Bresse Gauloise, French Marans, Dutch Bantams, Welsummers and Appenzellers, a spokeswoman for the project said.

Around 6,000 hatching eggs from UK supply farms were taken into a pre-export quarantine facility, and were hatched to create an isolated parent flock. The first eggs from this flock have just been exported.

They will be incubated at Torrens Island quarantine station, near Adelaide, and raised with “guard” chickens, there to act as a check for any sign of imported diseases. With a 50% hatch rate expected, the facility hopes to raise approximately 3,000 chickens.

When they are six weeks old they will be blood tested and a culture of their droppings will be checked for any sign of diseases. If all of these tests prove to be negative, the chicks will be released to syndicate buyers at nine weeks of age.

The Australian Rare Poultry Importation Syndicate (ARPIS) consists of 64 members, who bought into the scheme five years ago. They selected breeds in “parcels” of 40 eggs, with two parcels being the minimum commitment. ARPIS is a private initiative overseen by the Australian Quarantine and Inspection Service (AQIS). The project has been supported by the Poultry Club of Great Britain and avian veterinarian scientist Dr David Spackman.